The aim of the preliminary study was to determine the feeding preference of the musky octo-pus (Eledone moschata) from its natural habitats. A total of 471 specimens were measured and their fully or partially full stomachs were fixed in 6% formaldehyde, and then analyzed in the laboratory. The degree of stomach fullness was estimated from 471 individuals, their capture times were precisely known (369 stomachs at 09:00 in morning; 102 stomachs at 12:00 in mid-day). Stomach contents were examined microscopically and prey categories could be identified in higher taxonomic level. Analysis of stomach contents showed that the musky octopus fed principally on crustaceans.

There are scarce studies on the diet and feed-ing activities of E. moschata. Boletzky (1975) stated that juveniles of E. moschata consume the small pieces of shrimp (Leander spp.) and crab (Carcinus maenas) or live crabs (C. maenas, Philocheras spp.), while molluscs (bivalves and gastropods) and fishes are generally rejected. On the soft sandy and muddy bottoms where E. mo-schata lives, crustaceans are various and abun-dant; it seems likely, therefore, that they are the main food items as in the related species E. cirr-hosa (Mangold, 1987). Şen (2007) reported that the musky octopuses showed significant prefe-rences amongst food items in this order: crusta-cean > molluscs > fish. Also, there is only one study on diet of E. moschata in the natural envi-ronment (Krstulović Šifner and Vrgoč, 2009). They notified that in nature E. moschata fed mainly with crustaceans (65%), fish (37.8%) and cephalopods (21.8%) according to their stomach contents. However, there is no study on diet and feeding of the musky octopus in the Aegean Sea. The aim of the present study is to determine the feeding of the musky octopus from its natural ha-bitats.

Monthly samples of Eledone moschata from bottom trawl net (18 mm stretched mesh) catches at depths between 30–78 m during one hour sur-vey. The survey was done using R/V ‘Egesuf’ (27 m length and 500 hp engine) from December 2004 to November 2005, except in February, July and October in the Bay of Izmir, northeastern Aegean. A total of 471 specimens were measured and fully or partially full stomachs were fixed in 6% formaldehyde, and analyzed in the labora-tory. The degree of stomach fullness was esti-mated from 471 individuals whose capture times were precisely known (369 stomachs at 09:00 in morning; 102 stomachs at 12:00 in midday). The following Zuev et al. (1985)’s scale of the sto-mach fullness was used: 0, empty; 1, traces of food; 2, filled less than half; 3, filled more than half; 4, full; 5, exclusively crammed, its walls distended (Laptikhovsky, 2002). The importance of stomach fullness according to the two diurnal times was evaluated calculating the index of sto-mach fullness (ISF = total stomach contents weight / total octopus body weight * 100) (Hys-lop, 1980). Chi-square test (χ2) was used for comparisons of stomach fullness between morn-ing and midday periods.

A total of 53 out of 210 stomachs (fully or partially full) were examined. Stomach contents were examined microscopically and prey catego-ries were identified in higher taxonomic level. Crustaceans were recognized by diagnostic ex-oskeleton fragments, extremities and eyes. Bony fishes were determined by otoliths.

Total body weights (BW) and dorsal mantle lengths (ML) of Eledone moschata were meas-ured in fresh animals to the nearest ± 1 mm and ± 0.01 g, respectively. The averages were given with standard errors (± SE). 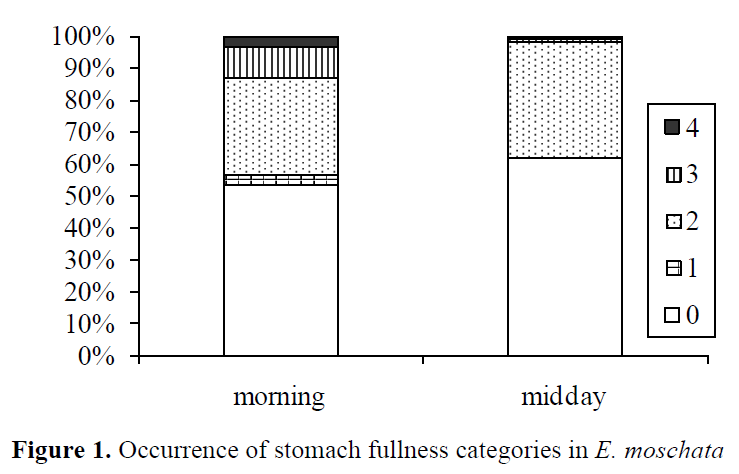 Analysis of stomach contents showed that the musky octopus fed principally on crustaceans and the others were found with crustacean remnants (Table 1.). Surprisingly, multifilament net yarn (Figure 2) and spine of sea urchin were found for the first time in a stomach of E. moschata. 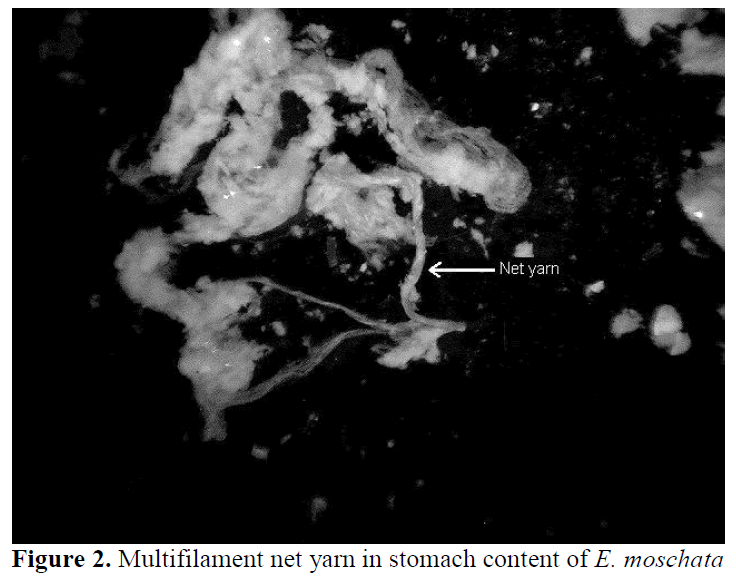 Despite the limited number of samples exam-ined, results indicated that E. moschata fed al-most exclusively on crustaceans, fish, gastropods and bivalves. The diet of E. moschata, reported in the current study, is similar to the previous stud-ies of this species (Şen 2007; Krstulovic´ Šifner and Vrgoč, 2009). There were differences in stomach fullness of E. moschata between the morning and the midday periods.

Krstulovic´ Šifner and Vrgoč (2009) re-ported that important prey categories of the larger specimens were crustaceans, fish and cephalo-pods, and also they observed cannibalism. Alt-hough, in this study crustaceans and fish were major preys, neither cephalopods nor cannibalism were observed.

In the present study, especially small crusta-ceans were eaten completely; these findings are parallel to results of Krstulovic´ Šifner and Vrgoč (2009). On the contrary, Şen (2007) reported that the musky octopus eat soft parts of the crusta-ceans and discharged exoskeletons in controlled conditions. However, it’s known that many octo-pus species change their feeding behavior de-pending on the size and life conditions (Guerra, 1978; Boucher-Rodoni et al., 1987; Nixon, 1987; Hanlon and Messenger, 1996). Additionally, the finding of multifilament net yarn in the stomach is the evidence of the opportunistic behavior of E. moschata, eaten the fish entangled to the com-mercial gill net.

In conclusion, according to the present results, E. moschata fed almost exclusively on crusta-ceans, fish, gastropods and bivalves. There were differences in stomach fullness of E. moschata between the morning and the midday periods. It seems that these animals feed probably at dusk as there were many empty stomachs of E. moschata. They are opportunistic animals able to change their feeding behaviors. So, the further and more detailed studies on diurnal and seasonal feeding habits of E. moschata in the Aegean Sea with determination of prey at lower taxonomic levels are needed.