Present research was carried out to study the diversity of Cladocera in Manasbal Lake and compare it with previous studies. In present study, 21 species of cladocerans were recorded belonging to 5 families: Chydoridae, Daphnidae, Bosminidae, Macrothricidae and Sididae. Chydorids were responsible for major cladoceran diversity followed by daphnids. The frequently species found were Chydorus sphaericus, Graptoleberis testudinaria, Daphnia pulex, Ceriodaphnia reticulata and Bosmina longirostris. While comparing the cladoceran diversity of present study with earlier studies, many species present earlier were not found in present study due to increasing pollution of the lake. However, five species (Chydorus sphaericus, Graptoleberis testudinaria, Bosmina longirostris, Sida crystallina and Diaphanosoma brachyurum) recorded earlier were still present and were reported by all authors. This depicted that these species can tolerate wide range of fluctuations in environmental changes. Further, Daphnia pulex was not recorded in earlier studies but was recorded latter which also showed increased pollution in the lake as this species prefers polluted water. Environmental changes have great influence on distribution of cladocerans and therefore, they act as excellent indicators of pollution.

Zooplankton are the most important biotic components influencing all the functional aspects of an aquatic ecosystem, such as food chains, food webs, energy flow and cycling of matter (Murugan et al., 1998; Dadhick and Saxena, 1999; Sinha and Islam, 2002). The composition of plankton communities displays marked seasonality for different types of lake morphology and trophic states, this pattern of plankton species succession is driven by interacting forces primarily physical changes, resource availability and interactions between the species present (Sommer et al., 1986; Hart, 2004; Abrantes et al., 2005). Major zooplankton forms vary in their relative abundance and they belong to the groups: Protozoa, Rotifera & Crustacea. Crustacea comprises of orders Cladocera, Copepoda, and Ostracoda. Cladocera is an ancient group of Palaeozoic origin (Forro et al., 2008) and includes mainly micro-zooplankton (Dodson and Frey, 2001). The greater significance of Cladocera in the aquatic food chain as food for both young and adult fish was established much earlier (Pennak, 1978). In addition to provide an important food source for planktivorous fish and aquatic invertebrates, they are important grazers on algae and detritus (Balayla & Moss, 2004) and play an important role in the recycling of nutrients in aquatic ecosystems (Hudson et al., 1999; Urabe et al., 2002). This group feeds on smaller zooplankton, bacterioplankton and algae (Murugan et al., 1998) and also affect the population growth of bacteria, heterotrophic protozoans, microalgae, and even some rotifer species through trophic relationships and competition (Arnold, 1971; Pace and Vaque, 1994). Globally about 620 species of Cladocera are currently known, but it is estimated that the actual number is much higher than this (Forro et al., 2008). About 187 species of fresh water Cladocera have been reported from India (Raghunathan and Kumar, 2003).

Manasbal Lake (34o 14' 38'' N to 34o15' 26'' N latitude and 74o39' 07'' E to74o 41' 20'' E longitude) is located in district Ganderbal about 32 Kilometres away towards North West of Srinagar city in the State of Jammu and Kashmir, India. The lake is situated at an altitude of 1584 m.a.m.s.l. Manasbal Lake is the deepest (12 m) of all the freshwater lakes fed by groundwater in Kashmir Valley (Lawrence, 1895; Raina, 1971) and covers an area of about 2.81 km2. Manasbal is a marl lake, has predominantly rural surrounding. The lake has no major inflows and its water supply is chiefly derived from internal springs and precipitation. However the lake is also fed seasonally by an irrigational stream Laar- Kuhl on the eastern side which is operational only during spring - autumn. It is a warm monomictic lake in which stratification starts in March and lasts till November and mixing takes place in early December (Yousuf, 1979). Five sites were selected in the lake on the basis of variation in macrophytic composition and abundance, depth of water, extent of anthropogenic pressures and nearness to inflow and outflow channels. Except for the open water site, which was sampled depth wise i.e., surface, middle and bottom denoted by SV (s), SV (m) and SV (b) respectively, rest of the sites (SI to SIV) were sampled from the surface only (Figure 1). 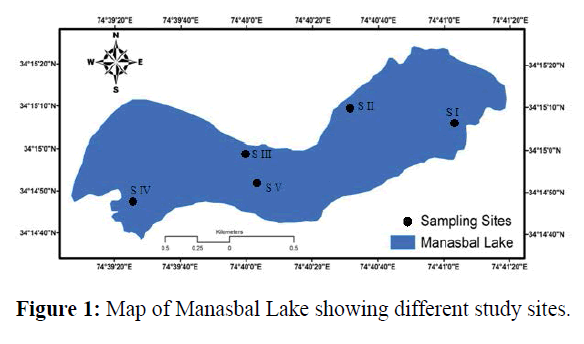 Qualitative study of the Cladocera was carried out by hauling a standard plankton net (60 meshes/cm) at selected sites so as to cover maximum area (Tait et al., 1984). A plankton tube was attached to the lower end of the conical net and the material collected during hauling was preserved by adding 4% formalin at the collection site. Qualitative studies were carried out up to the genus/species level using the standard keys given by Pennak (1978); Edmondson (1992) and Battish (1992). For the quantitative studies Ruttner’s sampler was used. Ten litres of water from each site, procured by the sampler, were sieved through the plankton net. One ml of sample was placed on Sedgewick Rafter Counting Cell of 1 ml capacity and studied under compound microscope for quantitative enumeration. For accuracy the counting was done in triplicate and average of three counts was used to calculate the population dynamics of various species and hence of total zooplankton in individuals per litre of water by the formula given by Welch (1948).

Where, n=number of individuals per litre of water.

a=average number of individuals in 1 ml of the concentrated sample.

c=volume of the concentrated sample.

The different physico-chemical parameters of water showed spatio-temporal variations which ultimately influence the distribution of biotic community including zooplankton. The annual mean values of physicochemical parameters of Manasbal Lake are depicted in Table 1. In Manasbal Lake, 21 species of cladocerans were recorded belonging to 5 families: Chydoridae (10), Daphnidae (6), Bosminidae (2), Macrothricidae (1) and Sididae (2). Chydorids and daphnids were responsible for major cladoceran diversity (Sharma and Michael 1987). In Manasbal Lake most species belonged to the family Chydoridae which is in view of Yousuf and Qadri (1981c), who reported that this family plays a dominant role with regard to plankton dynamics. At littoral sites, SI, SII, SIII and SIV the number of species found were 15, 17, 12 and 13 whereas at limnetic site SV(s), SV(m) and SV(b) the species recorded were 13, 12 and 2 respectively. The distribution pattern of cladocerans at different sites is presented in Table 2. The frequently found species were Chydorus sphaericus, Graptoleberis testudinaria, Daphnia pulex, Ceriodaphnia reticulata and Bosmina longirostris. Further, Chydorus sphaericus and Daphnia pulex were only species found at bottom of limnetic zone as well. Most of the authors reported Bosmina longirostris, Chydorus sphaericus, Graptoleberis testudinaria and Ceriodaphnia reticulata as most widely distributed species in Kashmir waters and Daphnia pulex preferring relatively polluted waters (Balkhi, 1987; Yousuf et al., 1984; Balkhi and Yousuf, 1996; Siraj, 2003). Further, Chydorus sphaericus, Graptoleberis testudinaria, Daphnia pulex and Bosmina longirostris were regarded as true representatives of eutrophic habitat as per the studies of Yousuf et al. (2003). The most dominant and most frequently found species throughout the study period was Bosmina longirostris which preferred highly macrophyte infested areas. This is in relation to the findings of Fryer and Forshaw (1979); Balkhi and Yousuf (1996); Siraj (2003).

Table 2: Distribution pattern of Cladocera at different sites in Manasbal Lake from September 2014 to August 2015

High diversity and density of cladocerans were found in the months of May, June and July. The cladoceran abundance started increasing in spring and reached peak in late spring/early summer and lowest in winter thereby revealing a unimodal pattern of seasonal fluctuation. Single peak in cladoceran community was also depicted by Yousuf and Qadri (1985) in same study site. Peak population density as well as species diversity seems to be influenced by increased water temperature, high nutrient concentration, high phytoplankton biomass and considerable detritus runoff from the catchment area early in the spring (Yousuf et al. 1986; Balkhi and Yousuf, 1996; Masundire, 1994; Scheinin and Mattila, 2010) and also due to growth of new macrophytes in spring (Jeppesen et al. 1999; Meijer et al. 1999). Temperature plays an important role at every scale of zooplankton ecology from individual physiology to population dynamics (Goss and Bunting, 1983; Balkhi and Yousuf, 1996; Barry, 1997). While comparing the littoral and the limnetic zone of the Manasbal Lake it was reported that most of the species were common to both but the littoral sites had more dense population of Cladocera which appeared to be related to its shallow nature and overgrowth of macrophytes, providing varied habitats for different species than in water without vegetation (Fryer and Forshaw, 1979; Balkhi et al. 1992; Balkhi and Yousuf, 1996; Bozkurt and Guven, 2009).

A number of studies have been carried out on zooplankton (Cladocera) of the Manasbal Lake (Akthar, 1972; Yousuf, 1979; Subla et al., 1984; Pandit, 1992; Siraj, 2011). A comparative checklist of cladoceran species recorded during the present and previous studies in the Manasbal Lake is presented in Table 3. A comparison of the present list of species with that of Akthar (1972), who reported a total of 13 species of cladocerans, showed that 7 species reported then have disappeared now from the lake while 6 species are still present. Number of Cladocera species in Manasbal Lake as reported by Yousuf (1979) and Subla et al. (1984) were 20 and 13 respectively and while comparing it with present study most of the species are still present. Yousuf (1979) revealed a shift in dominance pattern of various species over the years as a result of gradual eutrophication of the lake. A comparison of the lists reveals that in the Manasbal Lake most species (i.e., 36) were reported by Pandit (1992) and among them most of the species are still present in the lake. However, many species reported earlier were not recorded during the present study, probably due to growing anthropogenic pressures. While comparing the present study with that of Siraj (2011), who reported 24 species and the species were almost similar however, three species were not recorded during present study such as Alona monocantha, Moina micrura and Daphnia rosea. There were five species (Chydorus sphaericus, Graptoleberis testudinaria, Bosmina longirostris, Sida crystallina and Diaphanosoma brachyurum) which were recorded by all the authors. This depicted that these species can resist and tolerate wide range of fluctuations in environmental changes. Further, Daphnia pulex was not recorded in earlier studies but was recorded latter which may be due to increasing pollution in the lake as this species prefers polluted waters (Balkhi and Yousuf 1996). The changes in physico-chemical parameters of water change the distribution of cladocerans. Hence environmental changes have great influence on diversity and density of zooplankton and therefore, they act as excellent indicators of pollution.

Table 3: List of cladoceran species reported from Manasbal Lake during the present and earlier studies.

While comparing the present and past cladoceran diversity of lake Manasbal, different authors reported different number and type of species. However, five species (Chydorus sphaericus, Graptoleberis testudinaria, Bosmina longirostris, Sida crystallina and Diaphanosoma brachyurum) were reported by all the authors. This depicted that these species are resistant and can tolerate wide range of fluctuations in environmental changes. Further, Daphnia pulex was not recorded earlier in Manasbal Lake but was recorded latter which may be due to increasing pollution in the lake as this species prefers polluted waters. Hence environmental changes have great influence on distribution of zooplankton and therefore, they act as excellent indicators of pollution.

Bozkurt, A., Guven, S.E. (2009) Zooplankton composition and distribution in vegetated and unvegetated area in three reservoirs in Hatay, Turkey Journal of Animal and Veterinary Advances 8, 984-994.

Scheinin, M.,Mattila, M. (2010) The structure and dynamics of Zooplankton communitiees in shallow bays in the northern Baltic Sea during a single growing season. Boreal Envirinmental Reserve15,397­-412.

Sharma, B.K. and Michael, R.G. (1987) Review of taxonomic studies on freshwater cladocera from India with remarks on biogeography. Hydrobiologia145, 29-33.

Siraj, S. (2003) Effect of pollutants on cladocera in the Dal lake with special reference to Daphnia spp. M.Phil. Thesis, University of Kashmir, Srinagar.

Yousuf, A.R.(1979)Studies on the limnology and Fisheries of lake Manasbal Kashmir.Ph.D. Thesis, University of Kashmir, Srinagar.