In this study, a 3x2 factorial feeding experiment was conducted to investigate the effect of feeding rate on growth performance, feed conversion ratio and meat yield of sterlet reared in a recirculating aquaculture system. The diet containing 45% protein 6.5% fat was offered to the sterlet with initial average weight of 187 g at three feeding rates: 1, 2 and 3% of body weight at 18.7 ±0.97°C for 60 days. SGR were 1.7 ±0.10, 2.1 ±0.11 and 2.0 ±0.11, respectively. FCR amounted as 1.8 ±0.11, 2.9 ±0.15 and 4.4 ±0.14, respectively. In terms of the hepatosomatic index, viscerasomatic index and carcass efficiency no statistic differences were found between feeding rate groups (P>0.05). Considering growth performance and FCR data, it can be con-cluded that the best growth of sterlet at 17-19°C was obtained in fish fed with 2% BW/day. As a result, the diet containing 45% protein and 6.5 % fat can be recommended for use at 2 % BW/day feeding rate for 150-300 g size sterlets.

The sterlet, Acipenser ruthenus, is a freshwater species. It originally inhabits the rivers of Eurasia, being widely distributed in rivers flowing into the Caspian, Black, Baltic, White, Barents and Kara Seas and the Sea of Azov. They reach to sexual maturity at 3-5 years in males and 5-8 years in females in nature condition (Hochleithner and Gessner, 1999).

The optimal temperature of sterlet is 18-22°C in 200-250 g and its growth rate decreases rapidly below 14°C (Ponomareva et al., 2002). It is a benthos feeder and its diet changes according to season and river inhabitants, but generally includes insect larvae, small molluscs and invertebrates (Solokov and Vasiliev, 1989).

The captive breeding of sturgeons was commenced in 1869 by a Russian academician Ovsyannikov who successfully fertilized sterlet eggs using milt of the Russian sturgeon (A. gueldenstaedtii) and stellate sturgeon (A. stellatus) (Ovsyannikov, 1870, 1872, 1873).

The most commonly used species is the Siberian sturgeon (Acipenser baerii) which is presently reared in 22 countries reaching a total production of about 8800 tonnes per year, followed by the Russian sturgeon cultured in about 16 countries, while the sterlet is presently cultured in 15 countries (Bronzi et al., 2011).

There is a few studies dealing with the culture of sturgeon (Williot et al. 2005; Gencharov, et al., 2009; Ronyai, 2009) and new studies continue to provide experience about sterlet reproduction reproduction. As a freshwater species sterlet is one of the species identified as a leading candidate for sturgeon culture, because it reaches commercial weight (1-2 kg) and sexual maturity (3-4 years) fastly. Under recirculation system conditions it can be propagated at the age of 2-3 years with an inter-spawning period of 1 year (Ronyai, 2006a; Ponomareva and Matishov, 2006).

In intensive fish farming operational cost mostly depends on the feed because it accounts for 60-80 percent of total production costs (Hasan et al., 2007). Therefore feeds will continue to dominate fish farming needs. On the other hand, growth performance and food utilization are ma-jor variables in fish culture and mostly related to water temperature. The aim of any fish farming is using low cost feeds and obtaining better growth performance.

The objective of the present study is to inves-tigate the effect of different feeding rates with a low fat diet containing appropriate protein on growth performance, food utilization and meat yield of sterlet reared in a recirculating aquacul-ture system.

The fish used in the experiment hatched in April 2011 and raised in the Research Institute for Fisheries, Aquaculture and Irrigation (HAKI) in Szarvas, Hungary. The experiment was con-ducted in January-Ferbuary 2012. Prior to meas-urement the fish was anaesthetized with clove oil (Akbulut et al., 2011). 120 fish with an average weight of 187 g were individually weighed to nearest 0.1 g and randomly placed into six tanks (1.1x1.1 m) in 2 subgroups. Water depths in the tanks with a middle outflow were set up to 25 cm with a 10 L/minute flow rate.

Six groups composing 20 sterlets each were fed with a commercial (3-3.5 mm) sunken pellet feed (Halpad Ltd. Szarvas, Hungary) with 45% protein and 6.5 % fat content. Three feeding rates were applied: 1, 2 and 3% of total body weight per day (BW/day), and the daily rations were cal-culated with expecting 0.6 SGR (%). The amounts of feed were correlated by weight meas-urements every 20 days. The feeding commenced at 08:00 every day at belt feeders set for 12 hours and lasted for 60 days. During the experiment water quality parameters were also checked, in-cluding daily temperature records with a mini-mum of 16.6°C and a maximum of 19.9°C (aver-age temperature was 18.7±0.97°C). The other measurements varied as follows: oxygen concen-tration 7.9-9.4 mg/l and saturation 81-99%.

Percentage relative change in weight was also used: RW change (%)=100 x (Wf–Wi)/Wi where t is the number of experiment days. Wi and Wf are the initial and final weights (g), F is the cumula-tive food consumption of fish in each tank.

The coefficient of variation (CV) was used to examine an inter-individual weight variation among the fish in each group: CV (%)=100xS.D./mean weight of the fish in each tank. Percentage relative was calculated as: CV change (%)=100*(CVf–CVi)/CVi.

At the end of experiment five fish from each tank were randomly sampled for indices estima-tions. Body weights, livers and viscera were indi-vidually weighed for calculation of hepatosomat-ic index (HIS), viscerasomatic index (VSI) and carcass efficiency (CE). Viscera included a liver and a gastrointestinal tract from esophagus to anus. Carcass weight (CW) was determined by subtracting viscera, head and fins from body weight.

Statistical tests were carried out using the SPSS software package for Windows. All data were subjected to one-way analysis of variance (ANOVA) and differences between means com-pared by the Tukey test at a 95% confidence in-terval (P<0.05).

Growth trend of fish during the course of the ex-periment is shown in Figure 1. The specific growth rates (SGR%) were significantly higher (P<0.05) in the 2 and 3% feeding rate groups than in 1% group (Table 1). Statistically signifi-cant differences were found in FCR between the 1, 2 and 3% of BW/day groups (P>0.05). The feeding rate did not influence neither the hepato-somatic index (HIS), nor viscerasomatic index (VSI) and carcass efficiency (CE) (P>0.05). The final meat yield parameters of sterlet are repre-sented in Table 2. 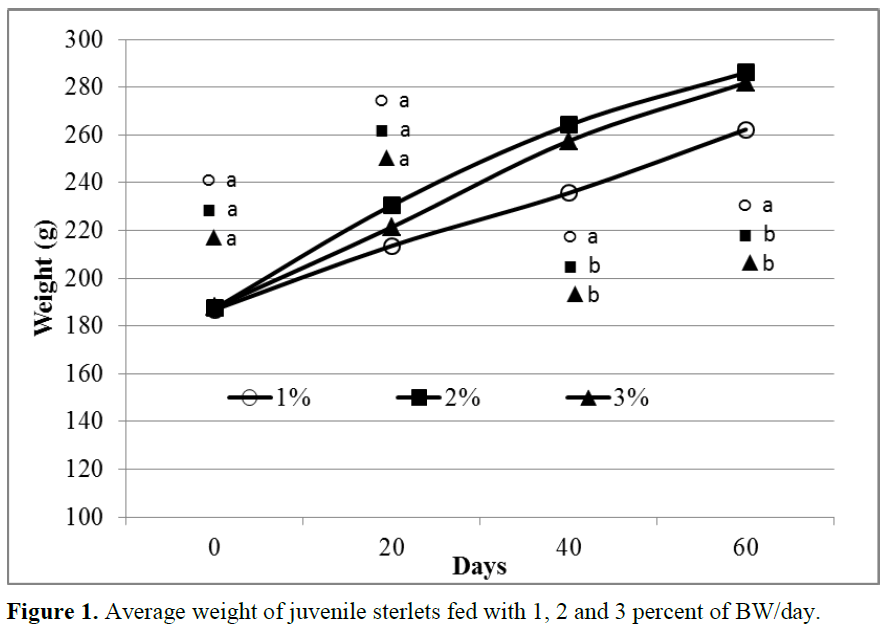 Figure 1. Average weight of juvenile sterlets fed with 1, 2 and 3 percent of BW/day.

When comparing growth and feed utilization of sterlet with other sturgeon species, it can be seen that growth rate of sterlet was a little bit slower but feed utilization was similar to those of the other sturgeons. In the case of meat yield of sterlet there are no published data, but there are some numbers for Russian sturgeon, for example, Sener et al. (2005 and 2006) who reported that dietary lipid effected on values of HIS and VSI in Russian sturgeon. Akbulut et al. (2013) calculat-ed HIS, VSI and CA as 3.28, 8.18 and 65.14 for 400 g Russian sturgeon and 2.97, 9.03 and 65.40 for stellate sturgeon.

Consequently determining the optimal feeding rates for sterlet is important to the success of its culture. Meat yield may also be helpful to deter-mine a daily feed amount of food in sturgeon cul-ture.

The financial support was provided by the Republic of Turkey, Ministry of Food, Agricul-ture and Livestock for this study which was con-ducted at the Research Institute for Fisheries, Aquaculture and Irrigation, Szarvas, Hungary. Many thanks to all our colleagues who helped and supported us during the study.

Ovsyannikov, F.V., (1872). On the sterletartifi-cial breeding experiments. Trudy Impera-torskogoVol'no-EkonomicheskogoObshchestva2, No. 1.

Ovsyannikov, F.V., (1873). The first experiment on the artificial breeding of sterlet in the Sankt-Petersburg region. Trudy Sankt-PetersburgskogoObshchestvaEstestvoispytatelei 4, No. 2.

Ronyai, A., (2006b). A growth model for the practical use in sturgeon feeding, Interna-tional Conference Aqua 2006, Florence, Ita-ly.