The expansion of fish farming has made farmers more concerned about losses in production. Handling of fishes in the field or in the laboratory is frequently characterized by increased susceptibility to disease thought to be mediated by immunologic suppression. In order to ascertain if such immunologic suppression occurs after stress, we conducted a laboratory study for the induction of acute handling (netting for 30 minutes and 1 hour) and transport stress (crowding for 30 minutes and 1 hour) that could reproducibly Affect haematological changes in African catfish, Clarias gariepinus, Burchell 1822 no significant differences was observed (p005) in the haematocrit, white blood cell (WBC), haemoglobin (Hb) and eosinophil of the stressed fish relative to the baseline values. Significant differences (p

Aquaculture urges for more accurate information on stress control, in order to assure health of fish, once those animals are confined into artificial environment. Most fish can tolerate to an extent environmental conditions that differ from their natural habitat. However, capture, transport, and handling are aquaculture procedures normally employed in intensive culture systems (Krieger- Azzolini et al., 1989; Narnaware et al, 1994). Haematological parameters can be of great importance for fish-farmers, serving as indicators of the physiological status and helping on the prevention and control of pathologies related to stress (Aldrin et al, 1982). The haematological characteristics of a number of culturable fish species have been studied with the aim of establishing normal value ranges, and any deviation from it may indicate a disturbance in the physiological processes, Rainza-Paiva et al. (2000), O’Neal et al. (2001). Several of these studies were attempts to determine if significant variations from normal values of these parameters exist that could be attributable to some internal or external factors (Munkittrick and Leatherland, 1983; Gabriel et al., 2001; Adeyemo et al, 2003).

Handling an transportation of fish may cause physiological changes, which may lead to metabolic disturbance, enzymatic dysfunction, and several other malfunctions in the fish (Kurovskaya and osadchaya, 1993). The magnitude and duration of such response are strongly related to the species and nutritional status (Pickering et al, 1982; Vijayan and Moon, 1992). African catfish (Clarias gariepinus) is an economically important tropical freshwater fish in Nigeria. It is also very hardy. Changes in the blood characteristics of Clarias gariepinus caused by stress because of exposure to environmental pollutants, diseases or attack by pathogens have been studied by a number of authors (Onusiriuka and Ufodike, 2000; Ezeri, 2001; Gabriel, et al., 2001). These indices have been employed in effectively monitoring the responses of the fish to the stressors and thus its health status under adverse conditions.

Stress factors due to capture, handling and sampling procedures are factors which can cause intra-species haematological variations (Bouck and Ball, 1966). The aim of this study was to determine the physiological response of Clarias gariepinus subjected to acute stress of net capture and handling.

Adult African catfish, Clarias gariepinus, (mean weight 585 g ± 100 g and mean length 27 cm ± 3 cm) were bought from a Zartech fish farm in Ibadan, Nigeria. The fish were acclimatized at 24.5-25.5oC for fourteen days in 25 liters aerated plastic tanks during which, they were fed with commercial fish pellet at 4% body weight. The natural photoperiod (16h light: 16h dark) was maintained during the period. Mortality during the period of acclimatization was less than 2%. Blood samples for Baseline data (Group A) was collected after fish were anaesthetized with 2mg of benzocaine dissolved in 5ml of acetone, which was further dissolved in 8 litres of water (Roberts, 1978). Blood was rapidly collected (within 60 seconds) from the caudal vein of each fish with syringes and needles containing EDTA (10%). Samples were analyzed in the laboratory for haematological and immunological parameters.

Blood was drawn from the posterior caudal vein using needle and syringes according to Schmitt et al. (1999) and 2ml was decanted in EDTA bottles for the assessment of haematological parameters, while another 2ml was decanted into heparinized bottles for the BLL determination. Whole blood (50μl) was stained for enumeration of red and white blood cells (Shaw, 1930). Blood smears were air-dried for five minutes, fixed in absolute methanol, and stained for 60 seconds in Giemsa stain.

Haematocrit and hemoglobin concentration (Hb) were conducted immediately. Haematocrit was determined by spinning blood samples contained in heparinized capillary tubes in a microhematocrit centrifuge. Hb was determined by the cyano-methaemoglobin method (Hesser, 1960). RBC was estimated using the relationship between Hb and haematocrit (Mirale, 1982). Blood smears made and stained with Giemsa, were used to determine the white blood cell count (WBC) and differential WBC counts (Stoskopf, 1993).

Data are presented as mean ± standard deviation. The results were collated and subjected to statistical analysis. Significance of findings was determined using student’s t-test. Findings were adjudged to be significant at 95% confidence limit (p≤0.05).

This present study revealed that haematocrit and red blood cell counts (RBC) was generally higher in the control (Group A) relative to the test populations (Groups B-E) however, the differences in values was not statistically significant (p<0.05) for Haematocrit, Hb and RBC (Figures 1- 3). Stress of handling has been shown to produce haemoconcentration and that the haematocrit of fish blood decreases after the stress of capture and transportation (Hattingh and van Pletzen, 1974). Lawani and Alawode, 1987 reported a significant (p<0.05) decrease (18.3 and 12.7) in the haematocrit of Oreochromis niloticus confined for thirty minutes and one hour respectively relative to the control (35.58). This difference in reaction between the two fish species is probably due to the fact that Clarias gariepinus are hardier than Oreochromis niloticus and also possesses accessory breathing organs, which enable them to survive better outside water. 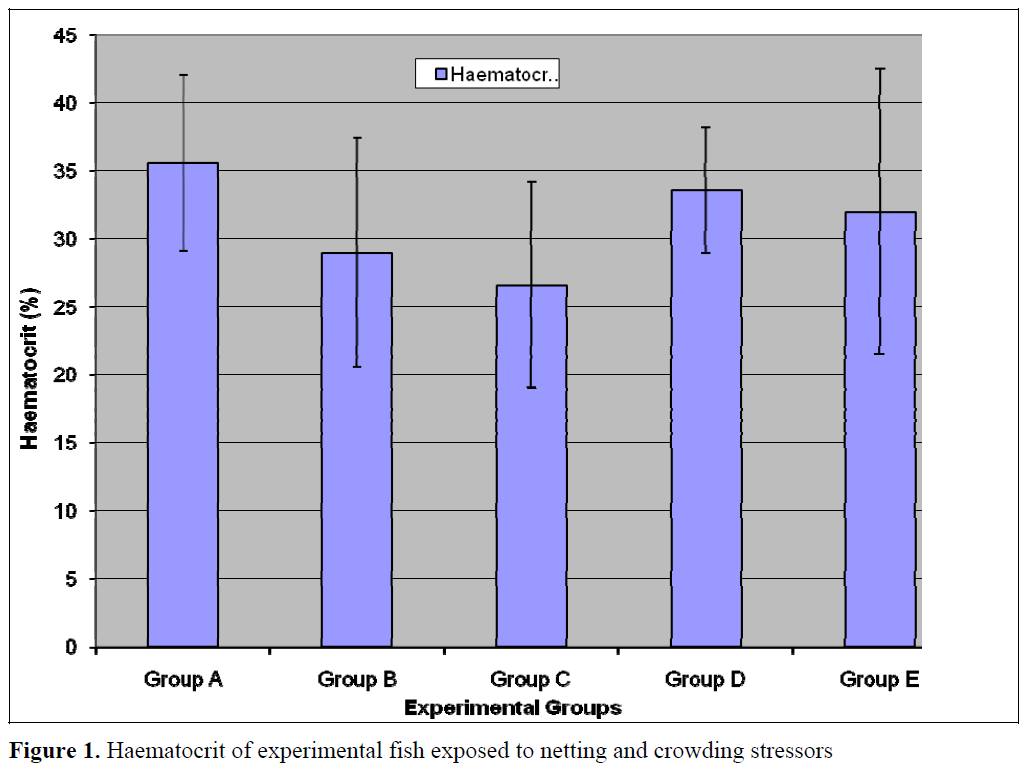 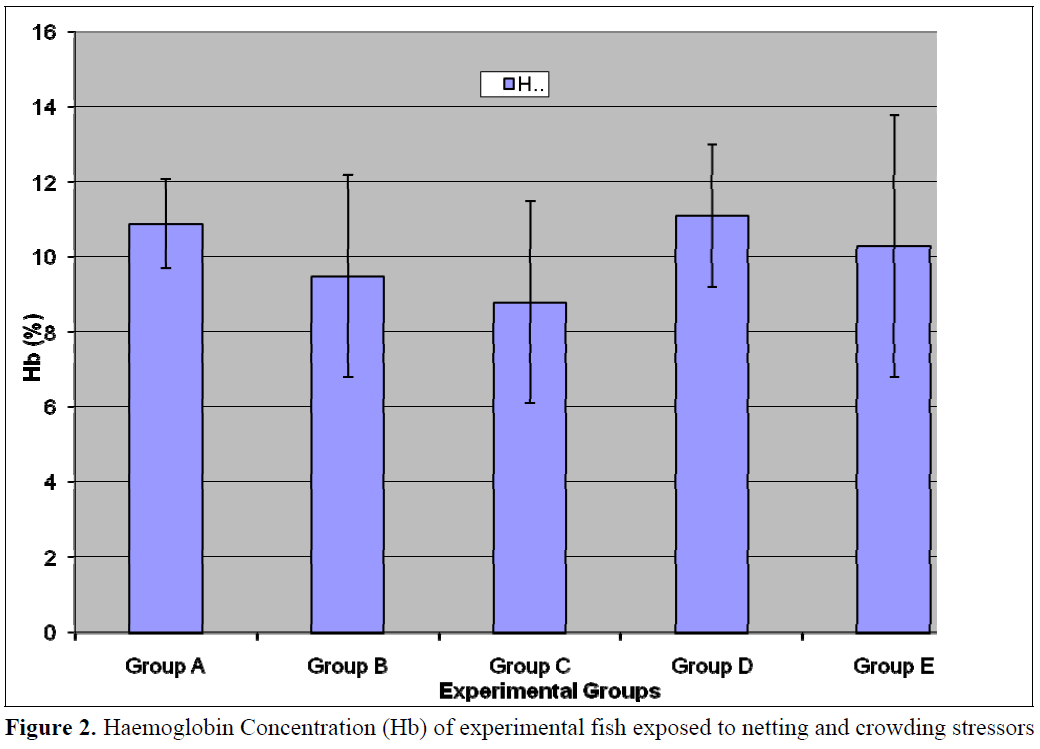 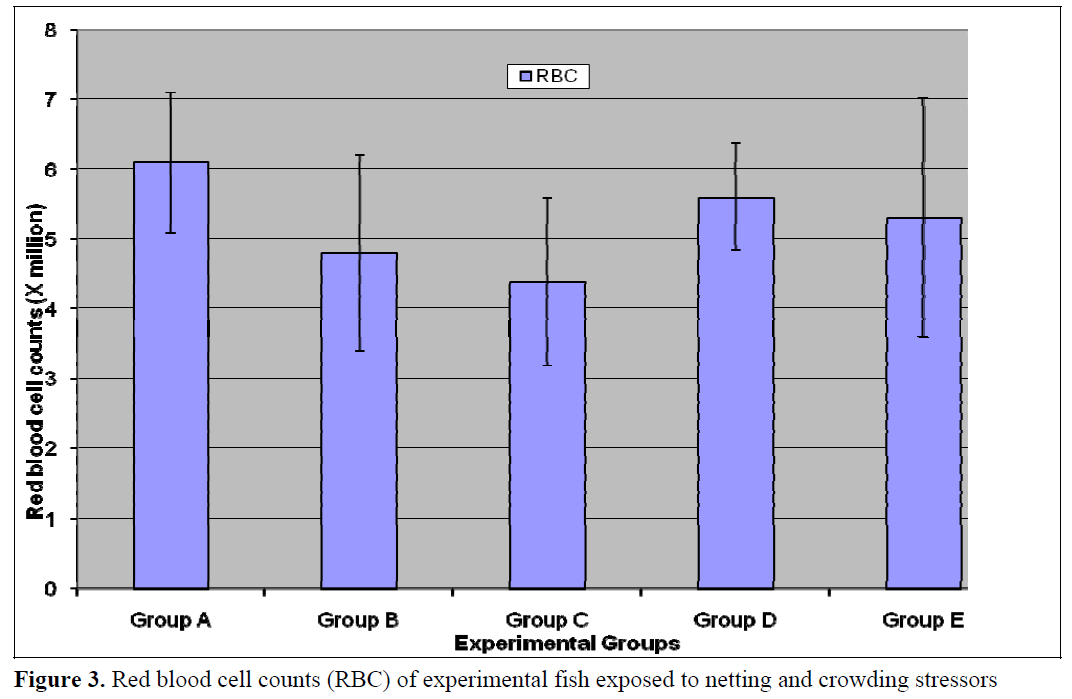 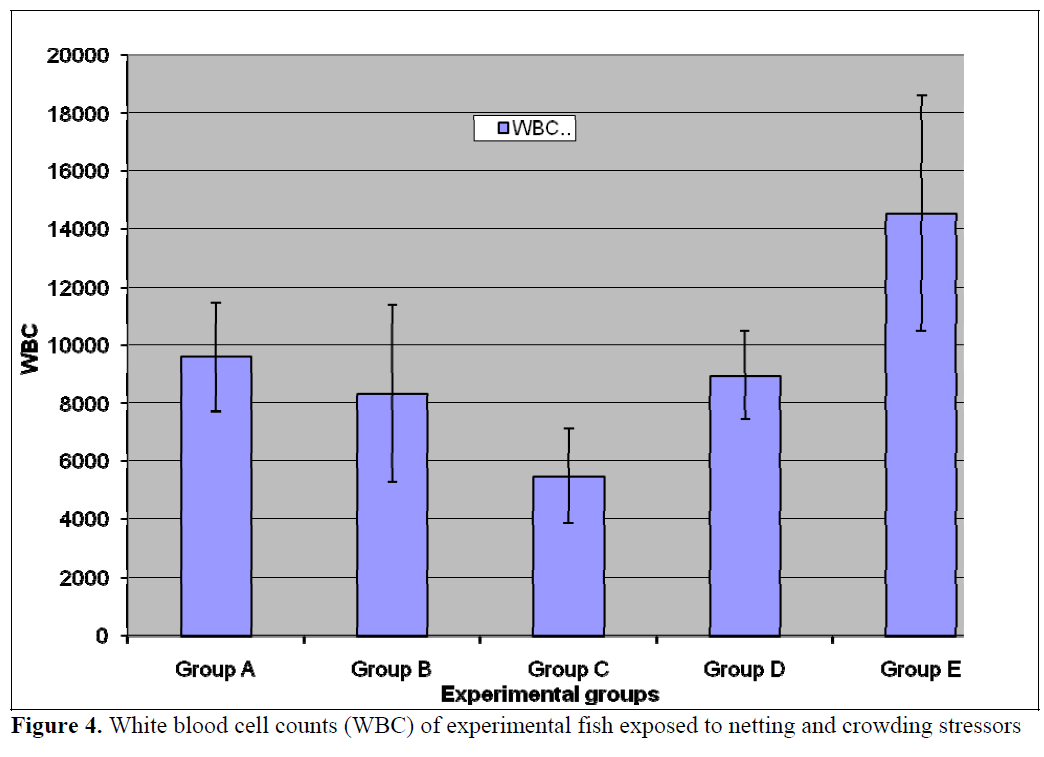 The numbers of neutrophils was significantly (p<0.05) lower in the treatment populations (Groups B-E) relative to the control (Figure 5). Stress has been linked to increase in susceptibility to infectious diseases (Pickering et al, 1982; Pickering and Pottinger, 1987; Maule et al., 1989; Wiik et al., 1989). Such decrease in disease resistance seems to be mediated by reduction of leukocytes number (Pickering et al, 1982; Ellsaesser and Clem, 1986; Ainsworth et al, 1991) or suppression of its activities (Pickering and Pottinger, 1985; Ellsaesser and Clem, 1986). Additionally, a statistically significant (p<0.05) lymphocytosis was observed in the treatment populations relative to the control (Figure 6). This is in agreement with the report of Pickering and Pottinger, (1987) that changes in the composition of circulating white blood cells are more reliable indicators of chronic crowding stress. There was no significant difference in the eosinophil counts (Figure 7) in all the groups. Stress has also been reported to act on others components of immune system, studies on both coldwater and warm water fish has shown that antibody production is lowered in periods of stress (Pickering and Pottinger, 1985; Wiik et al., 1989). 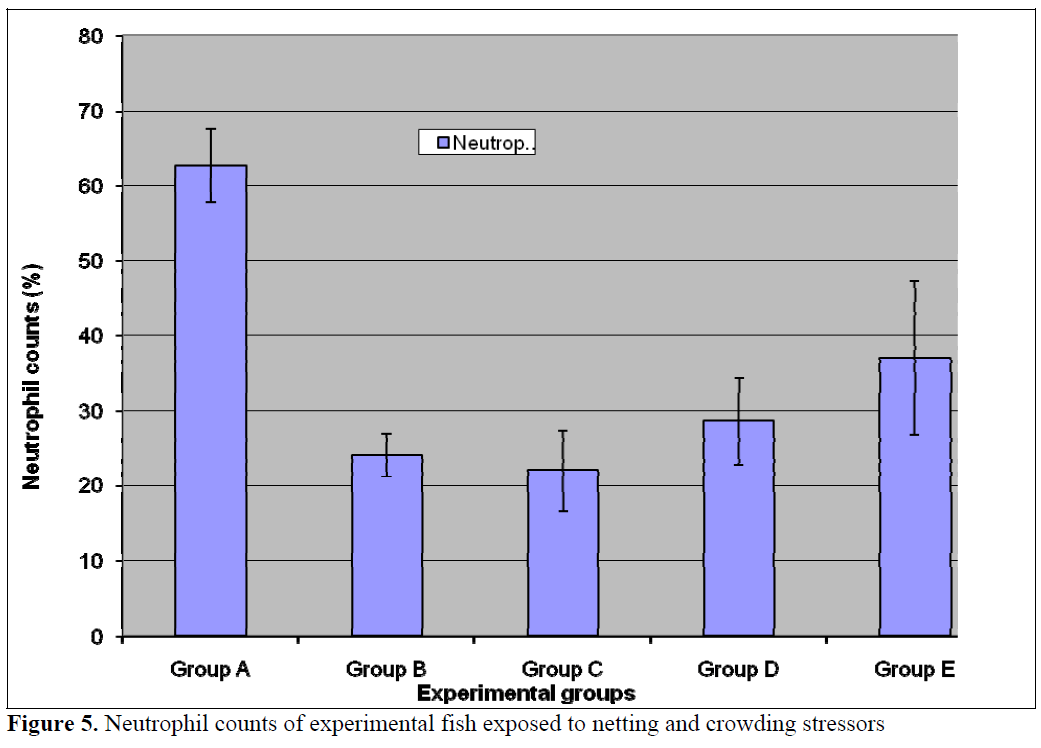 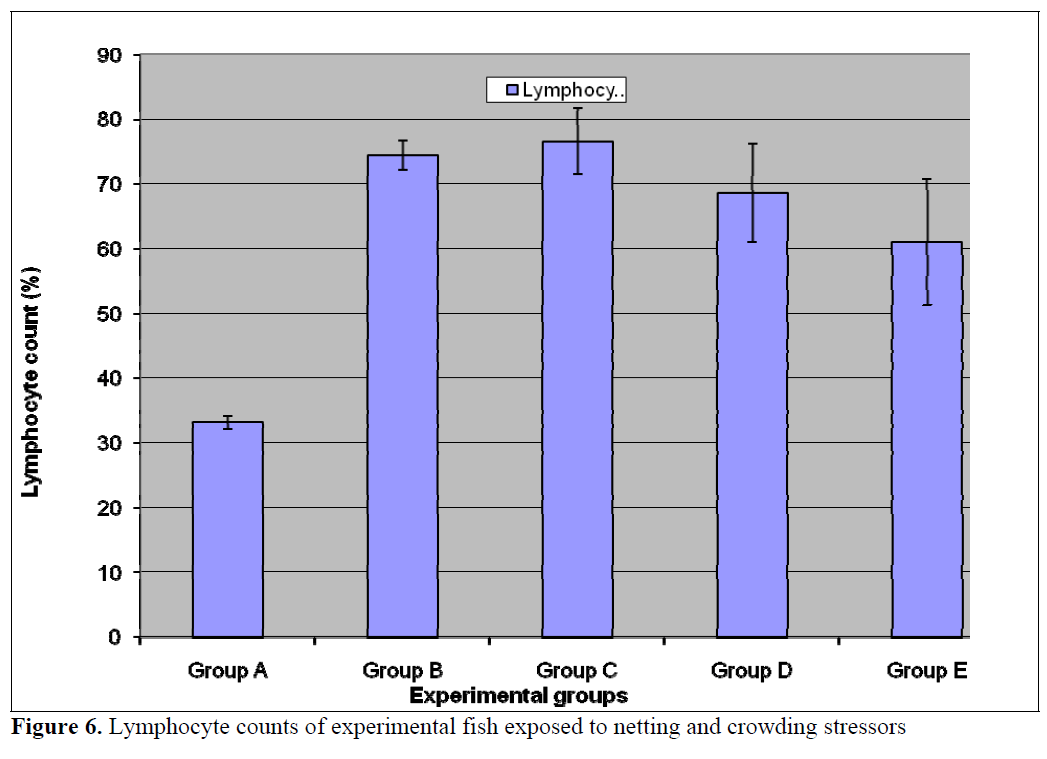 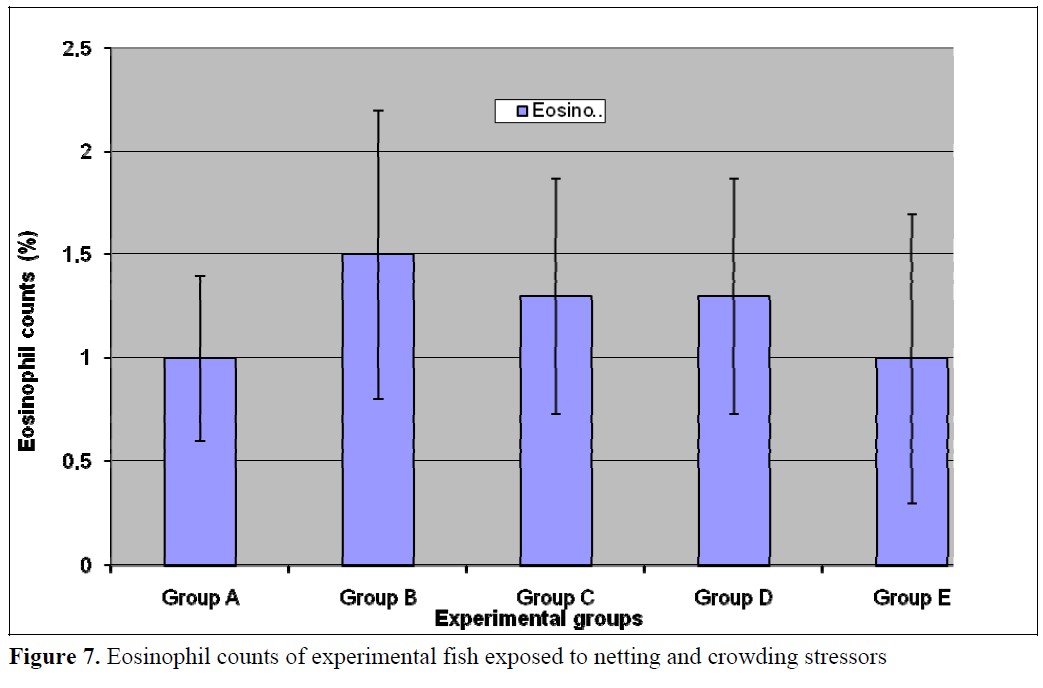 This study therefore concludes that, in culture systems, fish are affected by stressful procedures, such as handling and transportation. Handling stress might lead to important metabolic, osmoregulatory (Barton and Zitzow, 1995) and hematological (Ellsaesser and Clem, 1986; Barton and Zitzow, 1995; Carneiro and Uurbinati, 1998) changes, which may cause serious growth problems, susceptibility to disease, parasite infection and even death (Wiik et al., 1989). Nevertheless, elicited responses may vary among fish species and may be influenced by the type of stimulus and duration of exposure. Thus, future studies are required to identify methods which could minimize adverse effects, thereby preventing losses to fish farmers.

Hattingh,, J., Van Pletzen, A.J.J., (1974). The influence of capture and transportation on some blood parameters of fresh water fish. Comparative Biochemistry and Physiology, 49: 607-609.

Munkittrick, K.R., Leartherland, J.F., (1983). Haematocrit values in the feral goldfish, Carassius auratus as indicators of the health of the population. Journal of Fish Biology 23: 153 -161.