Evaluation of Micronuclei Frequencies and Other Nuclear Alterations in Erythrocytes of Tilapia Rendalli (Perciformes:Cichlidae) Induced By RoundupÃÂ® Herbicide

Micronuclei are chromosome fragments or entire chromosomes that do not incorporate in the main nucleus of the cell, remaining in the cytoplasm after mitosis. Micronucleus tests are usually used to inquire the damage caused in DNA by different external factors. Roundup→ is the most common herbicide used in the world, and it has an active agent denominated glyphosate that can be responsible for increases of nuclear alterations. The herbicide is a product of Monsanto®, so it does not affect Soya RR, but in natural conditions it could contaminate the aquatic ecosystems and its living creatures. The objective of this work was to inquire the frequency of erythrocytes with micronuclei and other nuclear alterations in the fish Tilapia rendalli induced by the herbicide Roundup® in different concentrations (5 mg/L and 15 mg/L) throughout 5 and 10 days of exposure. The blood cells were coloured with 15% Giemsa for 15 minutes and the counting was made in an optical microscope. In the present study, the frequency of erythrocytes with micronuclei induced by Roundup® in the treatments are larger than those in the control but are not significant (p>0.05). However, when the other nuclei alteration frequencies were compared with control they demonstrated significant (p<0.05) quantities in the concentrations of 5 and 15 mg/L along 5 and 10 days of exposure.

Concern about the use of pesticides for agricultural production is increasingly frequent due to both the environmental impacts and the damage they can cause to living things. For example, Clements et al. (1997) observed the genotoxicity of five herbicides most commonly used in Canada in Rana Catesbeiana tissues. Among these, four demonstrated significant DNA damage, one of which is Roundup®. Monsanto's Roundup® herbicide is universally used in the practice of biological control of herbaceous plants in reforestation and agricultural plantations (Ross et al., 2005).

The genotoxicity of this herbicide is due to its active agent, glyphosate isopropylamine (C6H17H2O5P). Glyphosate is absorbed by the chlorophyll region of the plants and translocated, preferably by the phloem, to the meristematic tissues, thus acting as a potent inhibitor of the activity of 5 enolpyruvylshikimate 3 phosphate (EPSPS) which is a catalyst for one of the reactions. From syntheses of these aromatic amino acids; phenylalanine, tyrosine and tryptophan, which also influence other processes, such as inhibition of chlorophyll synthesis, stimulation of ethylene production and reduction of protein synthesis (Monsanto, 2005).

Roundup® has also shown chromosomal effects, as Rank et al. (1993) observed a significant increase in chromosomal changes in onion cells during mitosis after treatment with Roundup® at concentrations of 1.44 and 2.88 mg. Grisolia et al., (2002) demonstrated an increase of micronucleated cells in tilapia cells exposed to different pesticides.

Biotechnological manipulations have created genetically modified organisms, such as transgenic RR soybeans resistant to the roundup herbicide, so this soybean usually receives a greater amount of glyphosate due to its resistance, and this compound can also contaminate the soil and aquatic environments. Thus, this work evaluated the frequency of micronuclei and other nuclear alterations in the peripheral blood of Tilapia rendalli exposed to the herbicide Roundup®.

In Brazil, the introduction of fish, mainly due to socio economic reasons, such as the Tilapia that comes from the Congo, has been occurring since 1956 (Gurgel & Fernando, 1994).

The experimental use of the animals was all according to the ethics committee of Centro de Ciências Médicas e Biológicas da Pontifícia Universidade Católica de São Paulo (CCMB-PUC SP). Therefore, 60 specimens of young Tilapia from 5 to 10 cm in size were purchased from fish farms in the region, which were kept in a number of 10 per aquarium containing approximately 50 litres of filtered water and aerated at a temperature of (23ºC ± 1°C). The fish were fed commercial feed and remained in these conditions for two weeks for acclimatisation.

During the experiment the 60 fish were divided into 6 aquariums, 2 control and 4 with 5 mg/L and 15 mg/L Roundup®. The time of exposure to the herbicide was 5 and 10 days, and the control fish remained in the aquarium with clean water during the same times.

Peripheral blood collection was done by cardiac puncture under anaesthesia with benzocaine 100 mg/L for approximately two minutes and with blood collected smears were made and fixed in absolute methanol for 15 minutes, air dried and stained with 15% Giemsa for 15 minutes.

The determination of the frequency of micronucleated erythrocytes was performed in a common optical microscope with the aid of the blind test immersion objective. Micronucleated erythrocytes in a total of 1000 erythrocytes per fish were identified according to the criteria established by Fenech et al. (2003), spherical corpuscles with a diameter between 1/3 and 1/20 of the size of the main nucleus, in the same plane of focus, completely separated and with the same cytochemical characteristics of nuclear chromatin, proposed by Heddle (1973) and Schmid (1975).

We consider it opportune to observe other types of nuclear alterations according to criteria established by Tolbert et al. (1992) such as: nuclear buds, binucleate cells, nucleoplasmic bridges, karyorhexis and karyolysis). The results were submitted to Kruskal-Wallis non-parametric statistical test (Ayres et al., 2000).

The results obtained in our experiment demonstrated that the frequency of micronucleated erythrocytes in peripheral blood of Tilapia rendalli exposed to 5 and 15 mg/L of Roundup® herbicide during 5 and 10 days was higher, but statistically not significant (p>0.05) in relation to control (Table 1).

The frequency of cells with other nuclear alterations (Figures 1-4) showed higher and with significant differences in relation to the control (p<0.05) at concentrations of 5 and 15 mg/L for 5 and 10 days as can be seen in Table 1. 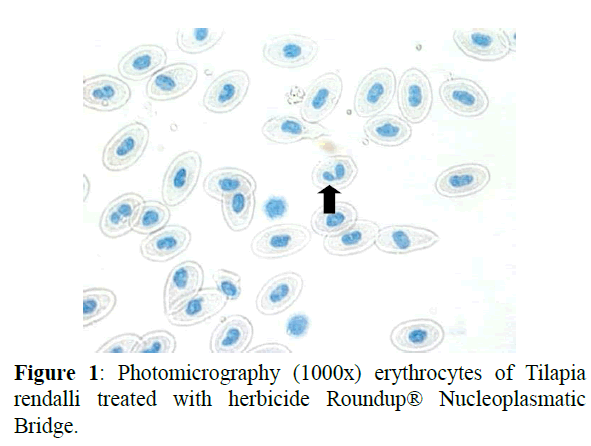 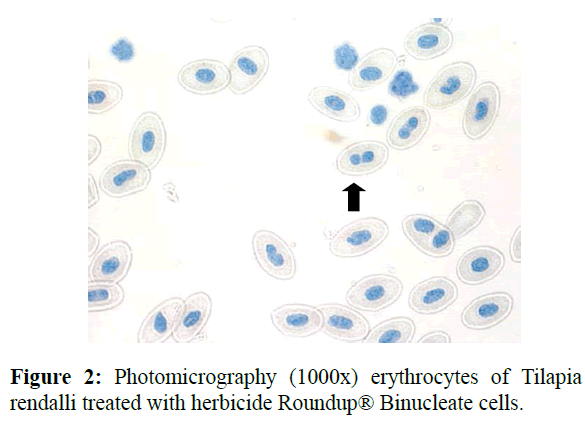 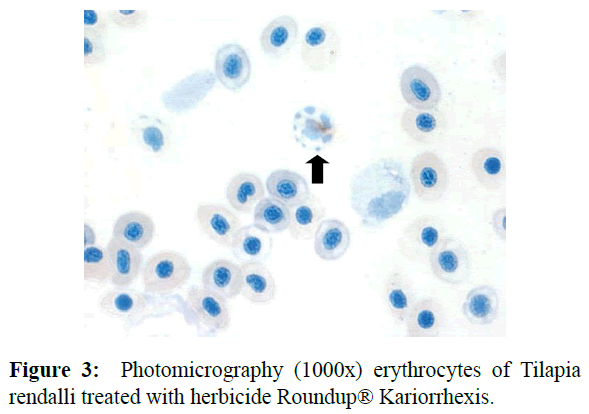 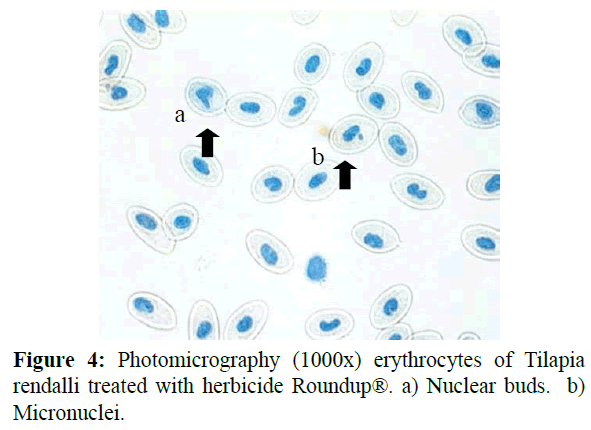 The results of the present study were similar to those reported in previous publications, like Grisolia et al., 2002. Grisolia, (2002) demonstrated significant differences (p<0.05) in the frequency of micronucleated erythrocytes in Tilapia rendalli, treated with different concentrations of Roundup® (42, 85 and 170 mg/kg). Williams et al. (1999) report that Roundup® in low concentrations poses no real risk to humans, but applicators and children from 1 to 6 years of age are potentially at risk from exposure.

In further studies with tilapia, in the review by Alvarez-Moya et al. (2014), the frequency of micronuclei in exposed individuals is somewhat higher. However, it does not compare to in vitro experiments, and the exposure is quite straightforward. Dias et al. (2005), reports that the in vitro micronucleus test has contributed greatly to the study of genotoxic agents. This article also suggests that the minimum concentration for the genotoxicity of glyphosate is about 12 mg/L. It is worth mentioning that studies focused on the frequency of micronuclei in fish erythrocytes are different in comparison to other organisms due to their metabolic difference.

The results obtained in our research demonstrated that the Roundup® herbicide caused a nonsignificant increase of Tilapia rendalli micronucleated erythrocytes exposed at concentrations of 5 and 15 mg/L for 5 and 10 days. However, it was possible to observe a significant increase of other nuclear alterations in concentrations of 5 and 15 mg/L in periods of 5 and 10 days of exposure to the herbicide. This fact was also observed by other researchers and indicative of genotoxic actions of the exposed animals.

As in other studies done with Roundup®, this clearly demonstrated genotoxic exposure to fish erythrocytes at different concentrations and times of exposure. This data could help standardise a threshold for herbicide use and avoid contamination in aquatic ecosystems, hence human.

The authors declare that they have no conflict of interest.

Thanks to Prof. Dr. Luciano Castanho for assigning his laboratory for this research, Leonardo Teixeira, Elcio Vasquez, Natasha dos Reis and Luciana Ramos for help in the development of the project and purchase of materials for the laboratory and Priscila Nanni for providing space for stocks of fishes. Thanks also to Professors Dr. Julio Boschini-Filho and Dr. Renata Manelli-Oliveira for the guidance of this work and to Edward Allan Nicholson for correcting the English of this work.