Batasio spilurus Ng 2006 was described from the vicinity of Dibrugarh, Assam (Brahmaputra River) and its distribution to tributaries of Brahmaputra River is unknown. Recent collections from Siang River at Pasighat, Arunachal Pradesh included this species, and hereby reported for the first time. With the record of this species, a total of five species of Batasio are known from the state. A key to the species of Batasio occurring in Arunachal Pradesh has also been provided.

Fishes of the genus Batasio Blyth, 1860, are small size fresh water bagrid catfishes inhibiting in the hill streams of the upper reaches of large rivers throughout the south and southeast Asia (Ng, 2006). The genus is diagnosed from its confamilials in having numerous large sensory pores on the head, a narrow mental region, anterior part of vomer with a pair of posteriorly-directed processes, entopterygoid bar-like and transversely-elongated, and the metapterygoid free from the hyomandibular but closely contact with the quadrate (Mo, 1991). Additionally, the genus is readily distinguished from other bagrid catfishes (except Chandramara Jayaram) by its short minute maxillary barbel which is restricted within extend of the head, which rarely crossed the posterior rim of the eye.

Methods of measurements and fin count followed Ng and Kottelat (2001). Fin rays were counted under transmitted light using a Nikon SMZ 800 stereoscopic microscope. Numbers in parentheses following a count are the number of specimens with that count. The method for clearing and staining of bones follows Hollister (1934). The collected specimens for this study are deposited in the Rajiv Gandhi University Museum of Fishes (RGUMF), Itanagar.

Measurements were made using dial calipers taken to the nearest tenth of a millimeter. Methods for counts and measurements follow Ng and Kottelat (2001). Fin rays were counted under transmitted light using a stereoscopic microscope. The method for clearing and staining of bones follows Hollister (1934). Osteological characters were observed from cleared and stained specimens and nomenclature of bone follows (Mo, 1991). Specimens Collected for this study are deposited Rajiv Gandhi University Museum of Fishes, Doimukh (RGUMF). Abbreviations: SL-Standard Length; HL-Head Length. 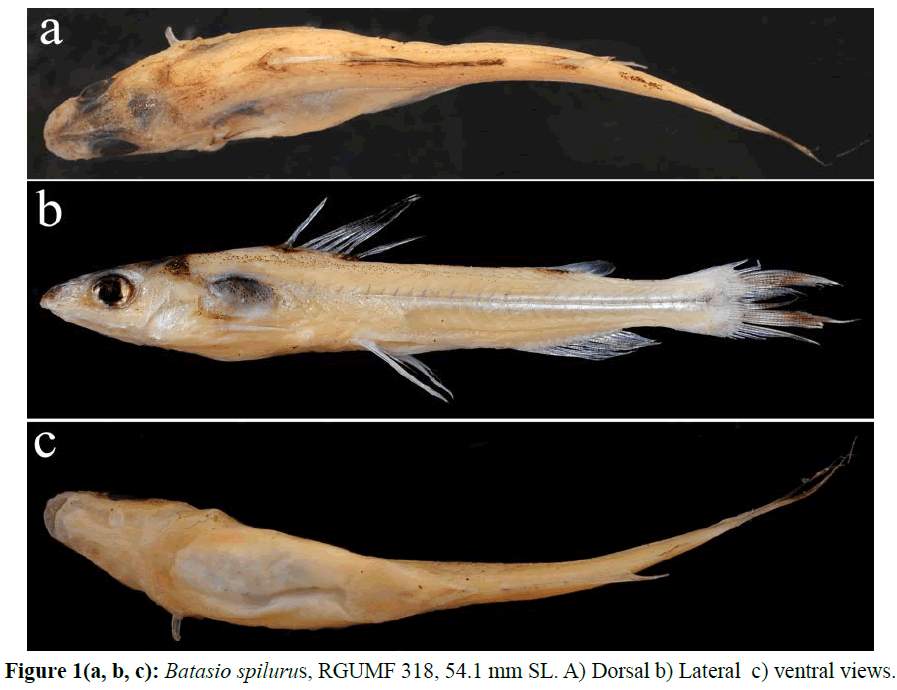 Table 1: Morphometric and meristic data of Batasio spilurus. (Holotype and paratype data are from Ng, 2006).

Head is slightly depressed and narrow. Dorsal surface of head covered with thin skin. Median longitudinal groove on head long, originated from slightly ahead of anterior margin of eye and extending to half of occipital spine. Posterior fontanel opening is reaching base of occipital spine. Occipital spine slender, basal half of spine bears a shallow median depression for supporting median longitudinal groove. Occipital spine reaching first nuchal plate of dorsal fin, posterior tip of spine forked to articulate with anteriorly pointed first nuchal plate. Orbit with free margin located on upper half of head, not visible from ventral side. Anterior nostril opening is tubular, well separated from posterior nostril. Sensory pores on head large and prominent. Eye is ovoid, horizontal axis longest; located entirely in dorsal half of head.

In 70% ethanol: head and body yellowish. Skin over occipital region with dense melanophores, imparting greyish brown colour on posterior portion of head. Mid-dorsal of body posterior to dorsal fin with a distinct greyish brown band, band interrupted at origin and also at posterior end of adipose-fin base. Dorsal half of tympanum (above pectoral fin) having a dark brown semilunate spot. Mid-lateral of body with pale greyish line extending from dorsal margin of tympanum to a greyish triangular spot at caudal fin base, numerous chevron-shaped marks interspersed at regular intervals along mid-lateral line. Anterior half of dorsal fin is dark brown ovoid mark.

The species is known from its type locality Dibrugarh, Assam (Brahmaputra River) (Ng, 2006) and presently recorded from the Siang River in Arunachal Pradesh (Figures 2 and 3). Figure 2: (a, b) Collection site of Batasio spilurus in Siang River at Pasighat, Arunachal Pradesh: a) Portion of river in southern bank b) Main river. 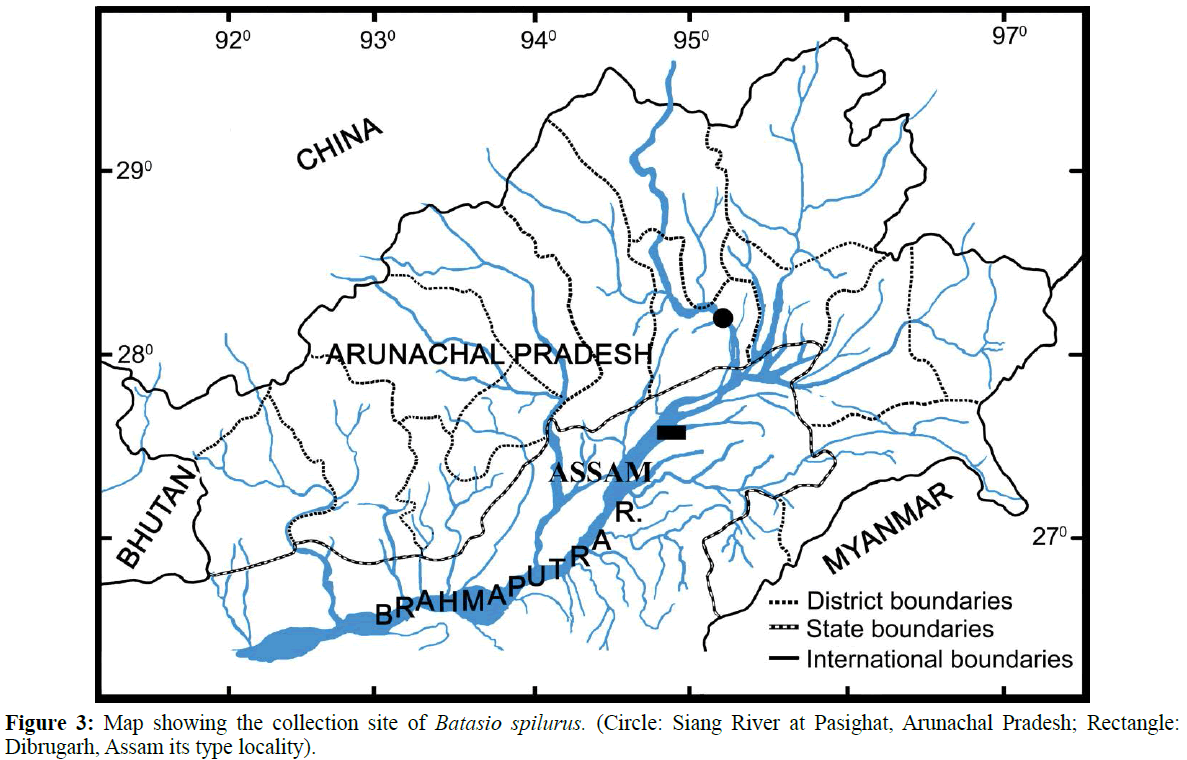 Ng (2006) re-described and clarified the identity of Batasio tengana based on the specimens collected from the Tista River and original drawing of Hamilton (1822), and he also pointed out that those specimens assigned to B. tengana by earlier workers viz. Hora and Law (1941), Jayaram (1977), and Ng and Kottelat (2001) are misidentifications of Batasio fasciolatus Ng. Hithertho, four species of Batasio are recorded from Arunachal Pradesh viz. B. fasciolatus form the Panye River (Subansiri basin) (Bagra et al., 2009), Batasio merianiensis (Chaudhuri, 1913) from Sille River, a tributary of Siang River in East Siang district (Tamang and Sinha, 2014), Batasio tengana (Hamilton, 1822) from Noadhing River (Nath and Dey, 2000) and Batasio batasio (Hamilton, 1822) by Sen (2000) without mentioning the place of its occurrence. Present investigators also encountered B. batasio from the Siang, Subanshri, and Dibang Rivers of the state. Further, the present study recorded Batasio spirulus, a fifth species, from the Siang River of Arunachal Pradesh. It is observed that the specimens of B. spilurus slightly differ from the original description in the length of predorsal 36.1-38.1% SL (vs. 40.5-42.0% SL), dorsal-fin base 13.8-15.3 (vs. 15.5-15.8), adipose fin base 10.0% SL (vs. 12.6- 12.8), post adipose distance 19.5- 20.3 (vs. 18.3-19.0), depth of caudal peduncle 6.5-6.6 (vs. 5.7-6.2), and head length 23.4-24.2% SL (26.9-28.6); and also lesser anal fin count iv-v, 11-12 (vs. V, 8-19, i). These differences may be due to accessing small sample size (only two specimens) and immature stage fishes (40.5-42.0 mm SL), resulting in failure to accommodate the actual range of morphometric and meristic parameters of the species in the original description. We observed that the species get mature at about 54.1 mm SL (confirmed by observing egg during dissection).

Batasio sharavatiensis: Data from Bhatt and Jayaram (2004) and Arunachalam and Muralidharan (2007).

The authors are grateful to the University Grants Commission (UGC), New Delhi, for providing fellowship and research facility to AD (first author) and RD (second author) through the ‘Centre with Potential for Excellence in Biodiversity (CPEB-II), RGU, Doimukh. SA and DND (third and fourth author respectively) also acknowledged to the Department of Biotechnology, New Delhi (Project No. F.No. BT/382/NE/TBP/2012, dated 27/01/2014) for financial assistance.

Day, F. (1888) Supplement to the fishes of India; being a natural history of the fishes known to inhabit the seas and fresh waters of India, Burma, and Ceylon. Williams and Norgate, London, pp: 779-816.

Hamilton, B. (1822) An account of the fishes found in the River Ganges and its branches. Archibald Constable, Edinburgh and Hurst, Robinson, London, p: 405.

Mo, T.P. (1991) Anatomy, Relationships and Systematics of the Bagridae (Teleostei:Siluroidei) With A Hypothesis of Siluroid Phylogeny. Theses Zoologicae17,Koeltz, Koenigstein, pp: 216.