The contribution of the fishery sector to global economy and food security cannot be underestimated. Fish production serves as means of livelihoods to millions of people worldwide (Green Facts, 2004). It is estimated that the inland fisheries of Africa produce 2.1 million tonnes of fish, which represents 24% of the total global production from inland waters (FAO, 2004).

Even though it is a land locked country, Ethiopia is endowed with a number of lakes and rivers, which are believed to be promising potentials of different fish stock (Felegeselam, 2003). Fisheries production in Ethiopia is under-exploited while current demand exceeds supply by about four-fold. One of the big and immediate challenges of the country is addressing the problems of food security and poverty. Artisanal freshwater fishery is one of the most important economic activities in Ethiopia (FAO, 2012). Improvements in fishery sector would contribute to poverty alleviation and environmental sustainability in Ethiopia (Global Fish Alliance, 2010).

In this study, two-stage sampling technique was followed to select major PAs from 32 PAs where the fishermen come. During the first stage three districts where fishing activity is taking place was identified. From the total population size (1021), fifteen (15%) were taken for sample. During the second stage about 150 sample households were selected randomly based on probability proportional to size from the districts.

The design of the survey followed recommendations from the NOAA Panel on Contingent Valuation (Mitchell and Carson, 1988), and consisted of three sections. Questions in the survey’s first section asked about respondent’s socio economic characteristics and survey section two covered general environmental problems and the proposed lake fishery management improvement scheme. The third section questioned respondents about their WTP. The hypothetical market was created as “Assume that Government is planning (Ministry of Water Resource) to provide an improved lake fishery management through restocking different fish species, buying and distribute boats, recommended fishing gears and after that hiring the control over the lake to manage fish for you. From the proposed project the fishermen’s will benefited by securing their ownership and cost sharing for lake fishery management. Therefore, fishermen’s are required to pay for this service.

The contingent valuation employed a single-bounded dichotomous choice format, followed by open-ended questions in the WTP section. Interviewers were supervised by the researcher. Before the main survey interviewers were trained carefully on how they approach the problem to the respondents. Three data collectors (one each from three districts administration) with college diplomas, were given one day’s training to ensure they understood each question and learned how best to approach and interview respondents to get valid information and explain the whole scenario and their levels to be used in the survey in the training session, we emphasized that they had to obtain the approval of each respondent.

The study also conducted a trial survey of 15 household/ fishermen’s heads to determine the initial fee value and work out any problems. Three starting values were chosen based on the modes of their occurrence during the pretest survey. These prices are 35, 55 and 65 birr/month, and from the total of 150 respondents, 50/50/50 respondents were randomly selected and given the respective starting price for the initial bid. Data covered socioeconomic and demographic characteristics of the household, including gender and age of household head, marital status, household size, income, and environmental attributes, such as level of environmental awareness, etc.; and design variables, such as initial fee size.

Both descriptive and econometric analysis was employed to infer the data. Descriptive statistics such as mean, standard deviation, percentage, ratios and frequency were used to compare and contrast different categories of sample units with respect to the desired characteristics and contingency valuation method was employed for measuring the total value fishermen give for fishery management in lake Zeway.

`In certain applications, the dependent variable is continuous, but its range may be constrained and one important model in this category is the Tobit model.

Tobin (1958) devised what became known as the Tobit (Tobin’s probit) or censored normal regression model for situations in which y is observed for values greater than 0 but is not observed (that is, is censored) for values of zero or less.

Tobit model is for metric dependent variable and when it is “limited” in the sense we observe it only if it is above or below some cut off level. It is also called censored regression model. Censoring can be from below or from above, also called left or right censoring. The Tobit model uses all of the information, including information on censoring and provides consistent estimates.

It is important to note that the dependent variable, or the WTP, is not fully observed and the dependent variable assumes zero values for a substantial part of the sample but positive for the rest of the population. Ordinary least squares (OLS) on the whole sample or just the uncensored sample will provide inconsistent estimates of β. Because an OLS estimator cannot be applied, we use a Tobit model for the observed maximum willingness to pay (MWTP).

Let MWTP* be a latent variable which is not observed when it is less than or equal to zero but is observed if it is greater than zero. Following Wooldridge (2009), the Tobit model for observed MWTP is given by:

Household Characteristics and Test of Mean and Frequency Differences

According to the survey results, 100% of the respondents were male. This might be because of the fishing activity especially, harvesting from the lake is culturally the male responsibility.

The average monthly income from fish was 2339.17 birr/ month with minimum 200 and maximum 7800 birr/month. From the surveyed fishermen’s 56% has no alternative income other than fishery and 44% has alternative income other than fishery. The mean difference between the willing and non-willing respondents was insignificant for the monthly income from fish.

Actually, the two groups may not only differ in terms of continuous variables, but also in terms of discrete variables. In this case, a chi-square test was used to examine the existence of the statistically significant mean difference between the two groups. Therefore, three discrete variables were considered in this test (Table 2). The survey shows that, there is a wide differences in marital status, perception and membership status between the willing and non-willing households in the fishery management. The difference is highly significant at 1% probability level. This indicates married respondents more willing to pay than single or divorced. The respondent’s environmental perception indicates that, the respondents who have environmental perception are good the more willing to pay than their counterpart and similarly the membership status of the respondents.

Table 2: Characteristics of the sample respondents for discrete variables.

The mean willingness to pay amount was 36.97 birr/month with minimum and maximum amount of zero and 120 birr per/ month respectively. The monthly average WTP of the sampled fishermen’s accounts 1.71% of average monthly income of fishermen’s which was birr 2339.17 and it is below 5% (Table 3).

Derivation of Aggregate Demand And Estimation Of Total Revenue

The aggregate demand for fishery management has been derived from WTP information. The aggregate demand curve is derived using the mid willingness to pay amount along the vertical axis and the number of households' willing to pay at least that mid value along horizontal axis. As shown in Figure 1, the demand curve is negatively sloped indicating the fall of the demand for improved fishery management as user charges increase, like most other economic goods. 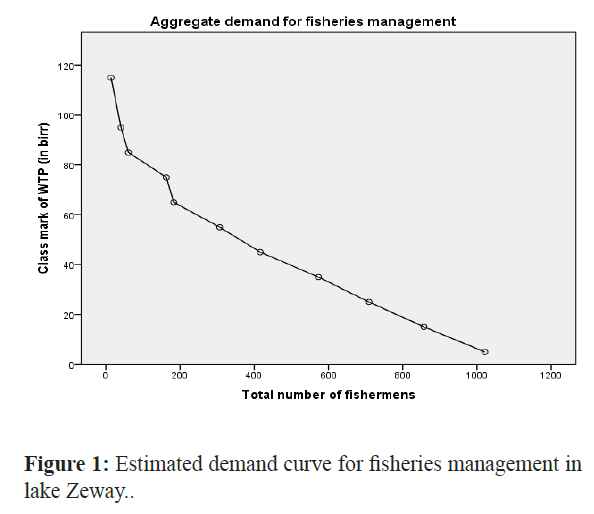 Total revenue that can be collected from charging a given price is obtained by multiplying the class mark by the corresponding total number of households willing to pay at least that amount. Therefore, total revenue first increases as monthly payment increases and reaches a maximum of 20,020 birr per month when the monthly payment is 35 per household. After that it decreases and reaches a minimum of 1,470 birr per month at the highest service charge due to a small number of households willing to pay that amount (Figure 2). 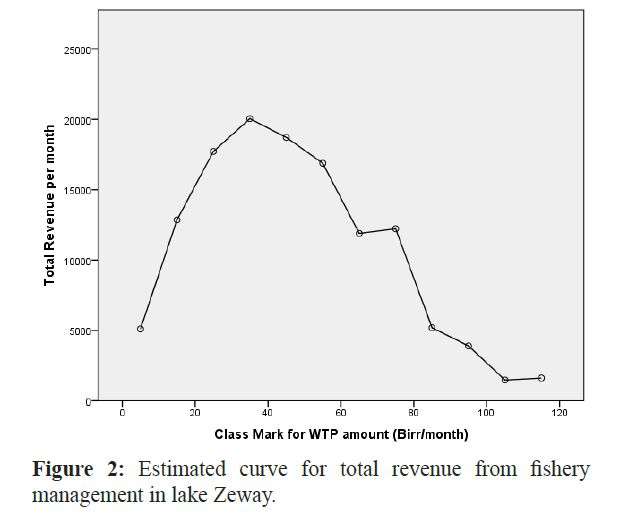 Table 4: Marginal effects of the explanatory variables on the amount of WTP.

Experience of the Respondents

Perception of the Respondents

The finding of this study clearly shows socioeconomic characteristics and fishing related variables that affect respondents WTP for fishery management. Based on the research findings we can draw the following recommendations:

The strong positively relation between income from fish and willingness to pay of the respondents shows that fishing is the main economic activity of the respondents and since the current situation of the fishing activity is open access, the management interventions should be needed from government or any stakeholders through licensing and applying the tax payment on the users.

Alternative income negatively affects the WTP of the respondents. It indicates that, having income other than fishery reduces the ownership responsibility for fishery management. Therefore, diversifying the income of the fishermen’s to reduce the pressure of fishing is needed.

Education, perception and experience of the respondents were affects the WTP positively and significantly. Therefore, training, awareness creation, education through formal and informal should be needed to fulfill the gap of perception of the respondents about problem of Lake Fishery management.

Even if the proclamation was available, still the governmental bodies did not give attention for fishery sector as done for other livestock and crop production. In monthly reporting format the fishery was not included and due to this extension contact was zero. Therefore, governmental bodies should be including the fishery in their program to increase the fishermen’s awareness about fishery management and to implement food security of the fishery

Words cannot express my heartfelt thanks to my wife Meti Takele who supported, inspired and encouraged me and also for her patience during the research work. I would like to express my sincere gratitude to Oromia Agricultural Research Institute for funding the research work. I would also like to thank Mr. Getachew Senbete the director of Zeway fisheries resources research center and the rest of the staff for their positive cooperation. Thank you so much for your support. I could not have done it without your friendship.

FAO (2004). The State of World Fisheries and Aquaculture Report.

Global Fish Alliance., (2010). The importance of capture fisheries in food security in Ethiopia. Fact sheets on state of fisheries in African countries.

Wooldridge 2009. Introductory Econometrics, 5th edition, Chap.17.2
Select your language of interest to view the total content in your interested language