The spawning seasons of Sardinella longiceps of Indian oil sardine was investigated based on examining gonads along the area of Oman Sea, Muscat, Sultanate of Oman. The length at first maturity (L50%) and Gonado-somatic index (GSI) of females were considered. Length at first maturity was estimated as 182 mm (TL). The GSI shows two spawning seasons: the minor one from December to March and the major once from June to September. The maximum GSI at-tained between 5.0 and 5.2 during June and September respectively, suggesting a spawning peak occurred during that period.

The Indian oil sardine Sardinella longiceps is a commercially important small pelagic resource in the Indo-Pacific region. It is widely distributed along the coast of Omani waters. This species forms a considerable proportion in the fish catches of Oman. In fact, no more studies in terms of spawning pattern on this fish have been conducted in Oman. Hence, a study was carried out to investigate the spawning patterns based on gonado-somatic index analysis. Studies of ova-ries on a monthly basis considered as appropriate method for biological analysis including indicat-ing the spawning season and length at first ma-turity of commercial species. Studies of spawning patterns of oil sardine based on GSI have been investigated by different scientists. Al-Jufaili et al. (2006) observed two major spawning peaks of S. longiceps in Oman; Muscat to be during March to April and August. The length at first maturity (L50%) was estimated between 125-135 mm in Oman and Arabian Sea (Dorr III, 1990). Recent reviews in India were also reported by Rohit and Bhat (2003) identified the spawning season dur-ing June to August, peaking in July along Manglore-Malpe coast. Banerji (1973) observed two spawning seasons in India, one in early sea-son and the other at the end of season during June to October.

Oman has a long coastline of 3,165 km bor-dered by Arabian Gulf, Oman Sea and Arabian Sea and is rich in biodiversity of species. Fisher-ies resources in the Sultanate of Oman are one of the significant renewable resources and support the country's economy to a greater extent. Fish-eries sector of Oman supports the second national economy after oil and gas. The total fish produc-tion of the Sultanate for the year 2009 stood at 158.000 tons of which the artisanal fisheries sector contributed to about 84% of the total fish production and the rest by industrial fleet (MOFW, 2000-2009). The total value of fishery production increased in 2009 to RO 104 million, up by 9% from the previous year 2008 and about 51% of the total fish produced had been exported to other countries. The small pelagic fishes con-tributed to about 34% of the artisanal production; while demersal fishes formed 32% and the large pelagics about 23% and crustaceans and mollusks 5%, sharks 3% and rest others. Of the small pe-lagic fisheries resources of Oman, the clupeids are the most dominant group in the landings. Alt- hough 19 species of clupeidae have been re-ported, only three species, such as Sardinella longiceps, S. gibbosa and S. sindensis are com-mon in the catches. These clupeids are coastal water species and occur in large schools. They are mainly targeted by the beach seine which lands up to 59% of the total sardine catches of the country.

There was a dramatic decline in landings in S. longiceps from 58,960 in 2001 to 32,092 tons in 2005. This decrease could be the reasons of heavy fishing pressure during that period. The market price of the species was probably high and was more preferred by fishermen to increase the catch. Further, other small pelagic and sardine species might not be present during that period and eventually Indian oil sardine appeared to be highly targeted. As a result, some of mature fishes may have been reduced during the spawn-ing season in certain areas. According to that, GSI study is established to investigate spawning peak which helps to provide some information on spawning season’s period as well as the gonad analysis is aiming to determine length at first maturation of Indian oil sardine in Oman Sea, Muscat, Sultanate of Oman.

Samples of S. longiceps were collected at ran-dom twice a month from artisanal catches mainly by beach seine of 47 mm stretched mesh size along the Muscat coast (Figure 1) for a period of one year from October 2008 to September 2009. A total of 830 fish were collected for biological analysis. The fishes were brought to laboratory in icebox, washed and prepared prior to biological measurements. The total length (TL), standard length (SL) and body depth were measured to the nearest 1 mm. The weight of each fish was taken to the nearest 1 g. Then the fish was dissected out to record the sex and maturity stage. The gonad was removed and weighted to the nearest 0.01g. 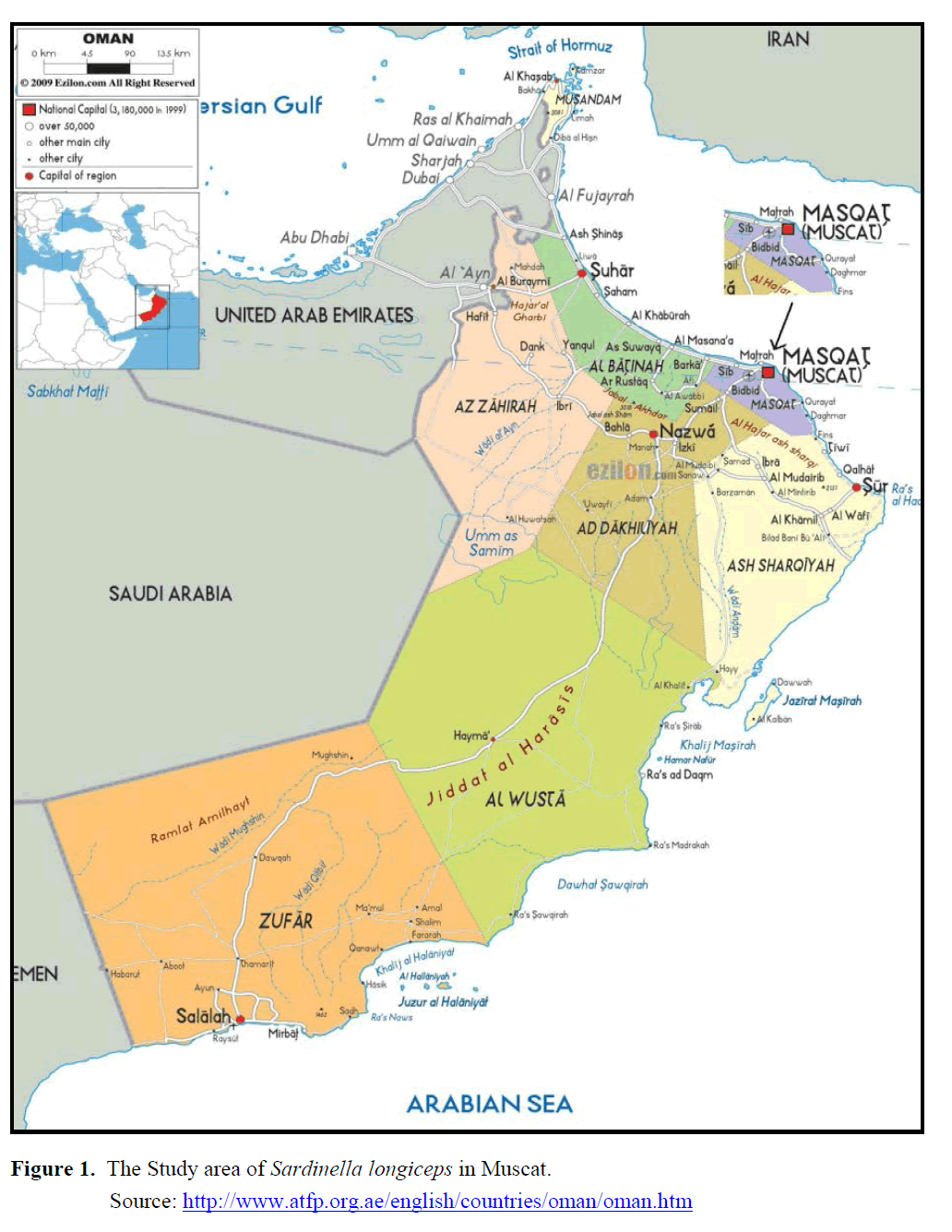 Figure 1: The Study area of Sardinella longiceps in Muscat.

The maturity stages of S. longiceps were studied on monthly basis. The gonad stages for female were examined. Seven stages of maturity were identified according to external appearance, color, shape and size of gonads shown (Table 1 ). Gonado-somatic index (GSI) was calculated for each fish on monthly basis in Muscat region us-ing the formula GSI = mass of gonad (g) / fish mass (g) in order to indicate the spawning season. A total of 830 fish were obtained for repro-ductive study. The length at first maturity of fe-male (L50%) of S. longiceps is determined as 182 mm (TL) (Figure 2). In addition, the GSI of fe-male was calculated on a monthly basis from October 2008 to September 2009. High GSI val-ues were observed during June and September with 5.0 to 5.2 respectively and moderately high values is occurred in March, April, May and Au-gust, suggesting spawning season occurred twice a year, the minor one from December to March and the major one from June to September (Figure 3). Length at first maturity (L50%) was estimated as 182 mm (TL). Siddeek et al. (1994) concluded the species appeared to spawn earlier at 159.3 mm (TL) in Omani waters. In the present study, the species reached maturity later at 182 mm which was appropriately reasonable as this spe-cies tend to shift their spawning and habitat sea-sonally due to biological and environmental events.

According to GSI, the species appeared to spawn twice a year. The first minor spawning was observed during December to March and the major once from June to September. This could be interpreted that species may attain spawning more than once in a year or during its lifespan in the tropical waters. This biological behavior was due to the species capability to shift back from stage 7 to stage 3 and resume spawning again.

Al- Barwani (1989) identified the spawning sea-son of S. longiceps in Oman occur in two spawning seasons during September to February in Muscat and May to October in Eastern region of Oman Sea, whereas in Arabian Sea the spawning activity was observed to be from May to September. Al-Jufaili et al. (2006) also ob-served two major spawning peaks of S. longiceps in Oman; Muscat to be during March to April and with peak during August where the GSI value attained 3.95, 4.07 and 4.41 respectively. Edward and Shaher (1986) observed the spawning season of Indian oil sardine in the Gulf of Aden while GSI of S. longiceps did not increase more than 1% of body weight during November to May and GSI increased to 7.5% of body weight during May to July. It appeared to begin spawning dur-ing a period from August to November and peaked during July to September. Hence, it was suggested that the spawning peak in the Gulf of Aden was during the period of upwelling and growth increased due to the abundance of plank-ton in the surface water. Those reviews were al-most agreed with the findings in the present study.

The GSI shows some indications of spawning peaks during June and September in the present study. This spawning peak was the period of upwelling which improves the abundance of plankton in Arabian Sea as Oman Sea may have been influenced by South-west monsoon seasons. It was suggested there was a correlation between temperature rise and fall in Oman Sea (Al-Jufaili et al. 2006). This period of spawning peak was considered as a summer season and rising in temperature would develop and increase the spawning activities. This was agreed as well by Siddeek et al. (1994), as he stated there was a relationship between sardine spawning pattern and oceanographic changes in Muscat. Reviews of reproductive pattern of S. longiceps were identified in Table 2. The reproductive biology observations obtained by recent reviews in Table 2 were almost agreed with the present study.

According to the examination of the ovaries, the S. longiceps species seemed to spawn gener-ally along the year. However, the spawning peaks were observed during June and September where GSI obtained as 5.0 to 5.2 respectively. The length at first maturity (L50%) suggested being 182 mm in the commercial catch along Muscat area which was more reasonable and representa-tive considered as short lived species that indi- cated this fish managed to spawn more than once of its life span. These biological key observations would help to provide some management utilities for the decisions maker in the future, suggesting that spawning areas should be identified and protected as well as the allowable size of the catch should be determined.

Dorr III, J.A., (1990). Small pelagic final report for the contract for technical services for staffing the Marine Science and Fisheries Center in Oman. Funded by the Omani-American Joint Commission as Project No272-0101.1-1.