Oxidative damages of lipid and protein in grey mullet (Mugil cephalus) were investigated in vitro by using Fenton reactants (Fe+2SO4/H2O2) to generate hydroxyl radical formation. Thiobarbutiric acid–reactive substances (TBARs, mg maonladehyde/ kg) were used to determine free radicalmediated oxidation of lipids. The oxidative modification of proteins was confirmed by carbonyl formation using with 2,4-dinitrophenylhydrazine (DNPH) and DNPH labeled of oxidized proteins by separated Sodium Dodecyl Sulfate-Polyacrylamide Gel Electrophoresis (SDS-PAGE). Lipids Oxidation of grey mullet with Fe+2/H2O2 gave a noticeable increase in TBARs value during 5h incubation. Protein carbonyl content decreased during the first 3h of incubation time on treatment with free radical generating system and then increased until 5th hours. At 3rd hours of incubation the intensity of the bands near 100 kDa and 150 kDa decreased and the bands above 50 kDa disappeared at 5th hours of incubation after exposure to Fe+2/H2O2. These data suggest that free radical generating system can alter the structure of a protein by leading to protein denaturation and increase in lipid oxidation by leading to development of off- flavors and off-odors during storage, which cause quality loss and limited storage life.

Lipid oxidation has detrimental effects on the nutritional and functional properties of fish and fish products accompanied by an offflavour or off-odour. Oxidizing of protein and their damages in the biological system has been studied over the past decades. However, the information about protein oxidation in fish muscle has not been given much attention (Kjærsgård and Jessen, 2004). There is no doubt that oxidative damages of proteins by hydroxyl radicals with subsequent alteration of their functions are unavoidable in aqueous phase in fish muscle (Srinivasan & Hultin, 1997; Soyer & Hultin, 2000). Limited studies on protein oxidation in fish muscle showed that the oxidation of protein can cause a decrease in protein solubility, an increase in protein carbonyl, and some loss in sulfhydryl groups and myosin heavy chain (Srinivasan & Hultin, 1997). These changes are known as protein denaturation and attributed to the denaturation/degradation of the structural muscle proteins (Saeed, Fawthrop & Howell, 1999; Soyer & Hultin, 2000; Saeed & Howell, 2004).

Iron that is important catalysts with their labile electron system is well suited to catalyze redox reactions (Kanner et al., 1988). The combination of H2O2 and a ferrous salt, which makes use of Fenton chemistry, is now considered to be the major mechanism by which the highly reactive hydroxyl radical that is generated in biological systems (Gutteridge et al., 1981; Kanner et al., 1986; Halliwell and Gutteridge, 1999). This mechanism is known as Harber-Weiss reaction (Kehrer, 2000) which is given below.

Hydroxy radical, a strong electrophilic compound, can easily react with the double bond of unsaturated lipids and propagate the chain reaction of lipid autoxidation (Choe and Min, 2006). It can also react with the side chains of amino acid residues at the metal binding side and cause oxidation of proteins in biological systems (Stadtman and Oliver, 1991).

Iron as a transition metal may be the most important lipid oxidation pro-oxidant in dark muscle fish due to its high reactivity and concentrations (Mei et al., 1998; Richards et al., 2002; Richards & Hultin, 2003; Undeland et al., 2004) and lipid oxidation in dark fish muscle increases in the presence of chelated iron or heme compounds (Hultin, 1992; Mei et al., 1998; Richards et al., 2002; Richards & Hultin, 2003; Undeland et al., 2004). Researchers have been suggesting that iron was the major catalyst of lipid oxidation in mullet dark muscle (Fisher and Deng, 1977) and liver (Ferreira et al., 2005). However, the effect of iron and hydroxyl radicals on oxidative damage of proteins in grey mullet is unknown. Many studies show that the Fe+2/H2O2 mixture is determined as the most efficient systems among the different metal catalyzed oxidation systems (Mercier et al., 2004; Martinaud et al., 1997; Nagasawa et al., 2001). From this point of view, Fe+2/H2O2 induced oxidation of lipid and proteins of mullet in vitro may be good indicator to determine oxidative damage. The determination of these changes is of great commercial importance for grey mullet, which has economic value in Turkey as fish and roe in order to determine the storage life. Therefore, the aim of this study was to evaluate the prooxidative effect of iron catalyzed oxidation in a Fenton-type (Fe+2SO4/H2O2) model system.

The grey mullet (Mugil cephalus) was purchased from a local fish market in Adana (Turkey). The fish were transported to the laboratory in ice and then they were gutted, washed, filleted and homogenized. The samples were either processed for oxidation procedure immediately or frozen at -80 °C until they were analyzed.

Fish muscle (1g) was homogenized in 10 ml of 100 mM sodium phosphate buffer (pH 7.0) using a homogenizer (Ultra- turrax, Ika T8) for 1 min at high speed. Ferrous sulphate (0.5 mM) and hydrogen peroxide (1 mM) were added to homogenate. 1/2 Fe+2/H2O2 ratio was used to obtain maximum effect of oxidative system as recommended by Mercier et al (2004). The mixtures were incubated for 0, 3 and 5 h at 37 °C in a water bath, and the reaction was stopped by adding of butylated hydroxytolune (BHT, to 0.02% final concentration) to aliquots of 2 ml of homogenate. The mixture was either analyzed for lipid oxidation immediately or frozen at -80 °C until they were used.

Lipid oxidation was evaluated by production of thiobarbutiric acid reactive substances (TBARs) according to the method of Lynch & Frei (1993). 0.25 ml of 1 % (w/v) 2- thiobarbutiric acid in 0.05 M NaOH and 0.25 ml of 2.8 % (w/v) trichloroacetic acid were added to 0.5 ml of incubated samples. The samples were then incubated in a boiling water bath for 10 min, cooled and extracted with 2 ml of n-butanol. After clarifying the pink chromagen, the color intensity of n-butanol layer was measured at 535 nm against a blank of n-butanol. The concentrations of TBARs in samples were calculated by reference to a standard curve by using 1,1,3,3,- tetramethoxypropane. The results were expressed as mg malonaldehyde (MDA) per kg fish muscle.

The Determination of Protein Oxidation

The protein carbonyl contents were detected by reactivity with 2,4 dinitrophenylhydrazine (DNPH) as described by Levine, Williams, Stadtman & Shacter (1994). Two equal aliquots of incubated samples for 0, 1, 3 and 5 h were precipitated with 10% trichloracetic acid (w/v) and then centrifuged at 12 000 rpm for 3 min. One pellet was treated with 2 M HCl, and the other was treated with 10 mM DNPH in 2 M HCl. Samples were placed in a sample holder and shaken continuously for 1 h at room temperature. The two fractions were then precipitated with 10% TCA and centrifuged at 12 000 rpm for 3 min. The pellets were washed with 1 ml of ethanol: ethyl acetate (1:1 v/v) to remove free DNPH reagent. The samples were then centrifuged at 12,000 rpm for 3 min, and the supernatants were discarded. The washing procedure was repeated three times in total. The proteins were finally dissolved in 1 ml of 6 M guanidine- HCl in 20 mM potassium phosphate buffer (pH 2.3, adjusted with trifluoroacetic acid). All samples were then centrifuged to remove any insoluble material. The concentration of DNPH was determined at 360 nm against the blank of 1 ml guanidine solution, and molar absorbtion coefficient of 22,000 M-1/cm was used to quantify the levels of protein carbonyls. Protein concentration was determined at 280 nm of absorbance in the samples using BSA in 6 M guanidine as standard. The results were expressed as nmol carbonyl /mg protein.

Derivation of oxidized proteins with DNPH for electrophoresis

Incubated samples were diluted with an equal volume of 12% sodium dodecyl sulphate (SDS) to a final concentration of 6 % SDS. The protein concentrations of samples were analyzed with Lowry protein assay (Lowry et al., 1951). Labeling of oxidized protein was determined by Levine et al (1994). 20 mM DNPH in 10% (v/v) triflouracetic acid anhydride (TFA) was added in equal volume of incubated samples containing 6% SDS. The reaction was performed for 30 min in the dark and the stopped by addition of equal volume of incubated samples of neutralization solution containing 1.85 M Trisma-base, 28% glycerol, and 100 mM dithiothreitol (DTT) and then centrifuged at 12,000 rpm for 3 min. Sodium Dodecyl Sulphate-Poyacrylamide Gel Electrophoresis (SDS-PAGE) was used to oxidation induced polymerization of oxidized protein. SDS-PAGE was performed %10 resolving gel and %4 stacking gel according to method of Laemmli (1970) using BioRad minigel electrophoresis. Gels were stained with a solution of 0.025% Coomassie Blue R-250, 40% methanol and 7% acetic acid, and stained again with a solution of 5% methanol and 7% acetic acid. 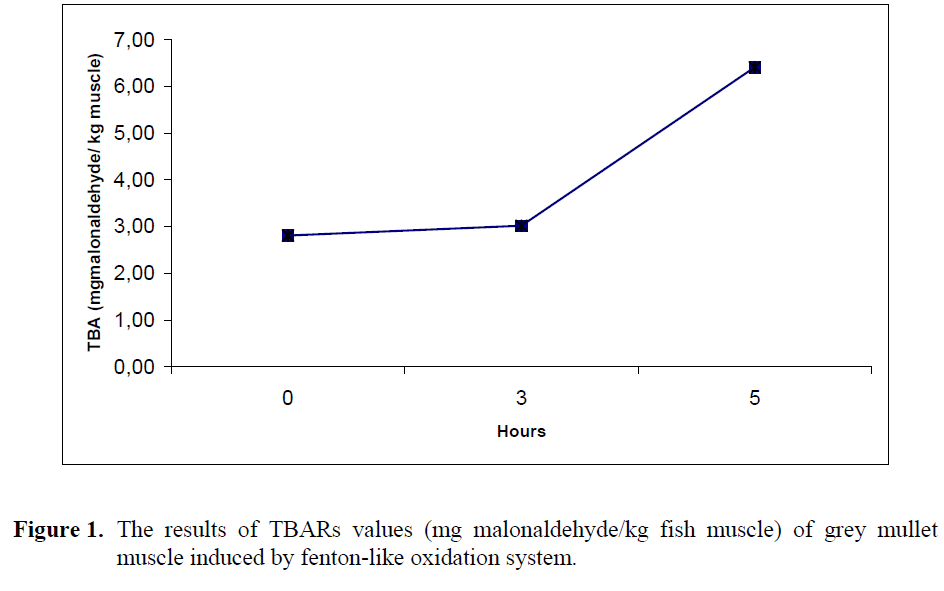 Treatment of grey mullet muscle with Fe+2SO4/H2O2 oxidation system for 0 h (2.81±0.16) and 3 h (3.02±0.60) at 37 °C had no significant effect on TBA values (p>0.05). However, after 5 h (6.41±0.55) incubation, there was a significant increase in TBARs values of grey mullet (p<0.05). The ferrous state of iron that is free to participate in Fenton chemistry produce hydroxide ion and a hydroxyl free radical which accelerate the lipid oxidation by breaking down hydrogen and lipid peroxides (Dunford, 1987). Soyer & Hultin (2000) observed that the TBARs values increased with an increase in iron concentration, when cod sarcoplasmic reticulum induced by non-enzymatic iron ascorbate oxidation system. Similar observation was found by Mei et al (1998) that increasing Fe+2 coming from FeSO4 concentration caused an increase of TBA formation in SDS emulsified salmon oil. These findings are agreed with our observations.

The time course of protein oxidation in grey mullet muscle as measured by carbonyls content (nmol carbonyl/ mg protein) is shown in Figure 2. 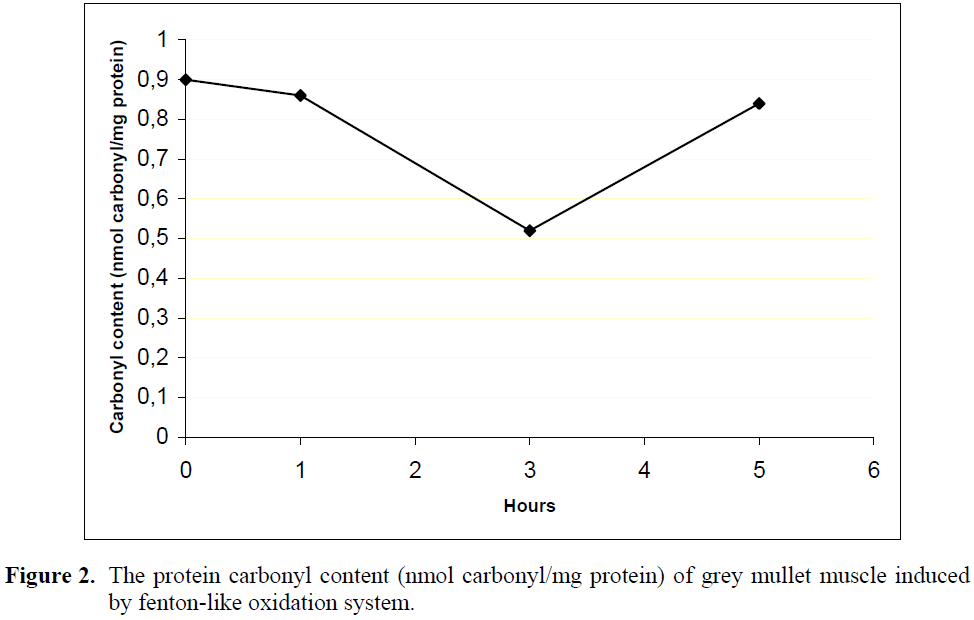 The coomassie staining of DNPH derivation of oxidized proteins

The coomassie staining of DNPH derivation of oxidized proteins in grey mullet is shown in Figure 3. Figure 3: The coomassie staining of DNPH derivation of oxidized proteins in grey mullet.

The bands above 50 kDa disappeared in grey mullet after 5 h hour of incubation and the intensity of the bands near 100 kDa and 150 kDa decreased after 3 hour of incubation with Fe+2/H2O2 oxidation mixture in the presence of DTT (Fig1). Many studies have shown that the fragmentation and polymerization of oxidized proteins with metal catalyzed oxidation systems occur via disulfide cross-linking in the presence of reducing agent (Uchida et al., 1992; Liu & Xiong, 2000; Ooizumu and Xiong, 2004; Thanonkaew, Benjakul, Visessanguan & Decker, 2006). The dramatic changes in electronic pattern of grey mullet proteins, however, can be explained with forming of high molecular weight polymers through non-disulfide linkages in the presence of reducing agent. These bands can not be seen from the top of the gel in Figure 3 because they did not enter the gels. This result is supported by Decker et al (1993) which showed that nondisulfide covalent bonds can also cause high molecular weight polymerization for the reason that not all of the polymers were dissociable in the presence reducing agent.

As a result of this study, the iron catalyzed oxidation system was responsible for lipid oxidation and the unwanted changes electrophoretic patterns of grey mullet protein that the oxidation of proteins occurs nondisulfide covalent linking. These chemical modifications can alter the structure of a protein, usually leading to its degradation known as protein denaturation during processing and storage conditions. Until now, the relationships between aggregation, denaturation and loss of functionality of fish muscle proteins are only partially understood. Such studies about protein oxidation in fish species will be clearer to understand these irreversible changes in fish muscle in order to determine the storage life.