Recently, studies have been focused on the production of microdiets for weaning periods of marine larvae (Yufera et al., 1999; Yufera et al., 2000). It is known that weaning period has a critical importance for marine fish larvae. Cahu and Zambonino Infante (1994) indicated that the survival and growth of marine fish larvae fed solely on microdiet through weaning period are known to be very poor, but supplementation with live foods usually results in a marked improve-ment. To explain the success of live food over microdiets, some authors showed that fish larvae had insufficient digestive enzyme capacity for the digestion of exogenous food (Munilla- Moran et al., 1990; Kolkovski et al.,1993; Kolkovski et al.,1996). Additional studies in this regard need to define the factors that influence the better uti-lization of live food by fish larvae when com-pared to microdiets. Therefore, attention has been focused on the contribution of digestive enzymes from Artemia nauplii and rotifers commonly used in the feeding of marine fish larvae (Kurokawa et al., 1998; Garcia-Ortega et al., 1998; Garcia-Or-tega et al., 2000). Garcia-Ortega et al. (2000) showed that the contribution of digestive en-zymes from Artemia to the total digestion of food by the catfish larvae was less than 1% of the total amount of the proteolytic activity measured in the larval gut.

The study was carried out at the Hatcharies of Pınar Marine Ltd. Co., İzmir, Turkey. Water temperature was controlled by pipe heating sys-tems. Fertilized eggs of Dentex dentex were col-lected from the broodstock tanks and incubated in conical fiber glass tanks at a temperature of 18 ºC. Newly hatched larvae were transferred from the incubators to fiber glass rearing tanks with black walls and fed according to the commercial feeding procedure (initial stocking density; ap-proximately 100 larvae l-1). All experiments were carried out in triplicate. The rearing tank supplied with running sea water that had been filtered through a UV filter. Salinity was 35-38 g l-1 dur-ing the experiment. The oxygen levels were maintained above 6.5 mg l-1 with liquid oxygen systems. Air and fresh sea water were introduced into the bottoms of the tanks to prevent water stratification.

Rotifers (Branchionus plicatilis) cultured on baker’s yeast (Saccharomyces cerevisae) were enriched with Selco. The average water temper-ature and salinity were 25ºC and 25 ppt, respec-tively. Samples for the protease activities and in-hibition assays were taken from rotifers and en-riched rotifers.

Artemia cysts were incubated in filtered sea-water at 30 ºC under continuous aeration and il-lumination. After 24 h, Artemia nauplii were collected and then washed with tap water and then the enrichment with Selco was done. Sam-ples for the protease activities and inhibition as-says were taken from newly hatched nauplii and enriched nauplii.

Extracts of larvae and live foods

Dentex dentex larvae fed on commercial feeding procedure were sampled eight times, with 5-day interval between sampling, during the 35-day sampling period (from day 30 to day 65). Larvae were taken before the morning feeding and immediately stored in liquid nitrogen (-196ºC) to prevent protein autolysis. Live food samples were stored in the same procedure. Sam-ples were rinsed in distilled water after thawing and then extracts of larvae and live foods were prepared by homogenization of the whole larvae followed by centrifugation (16000 g, 30 min, 4ºC).

Determination of protease activities of lar-vae and live foods

Results are given as mean± standard error (SE). Comparisons were made using a one-way analysis of variance (ANOVA) test, and differ-ences were considered significant at the p<0.05 level. SPSS statistical software was used for sta-tistical analyses (SPSS, 1993). 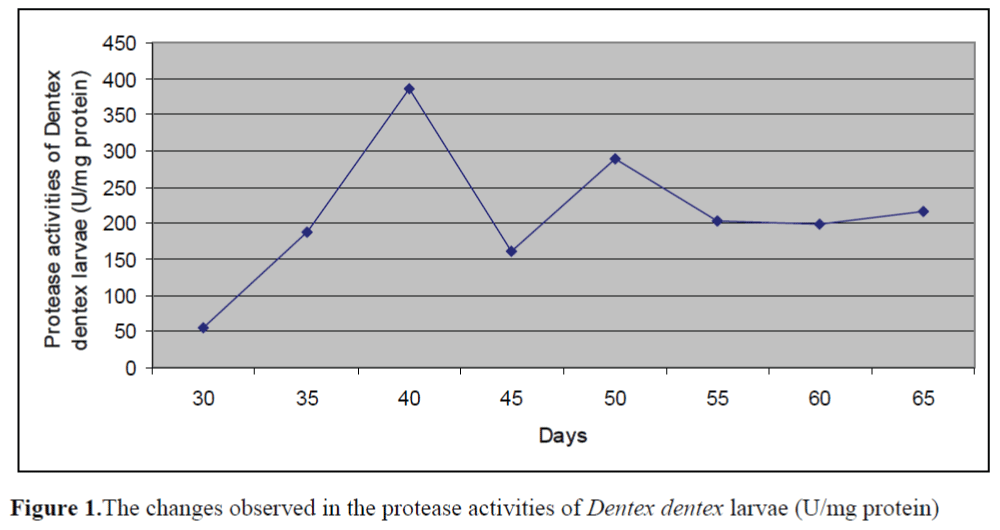 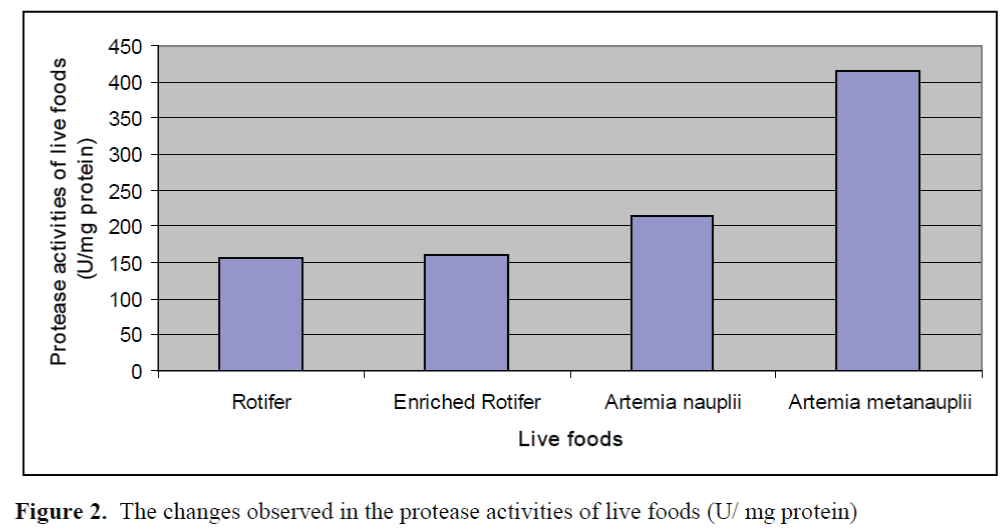 Figure 2. The changes observed in the protease activities of live foods (U/ mg protein) 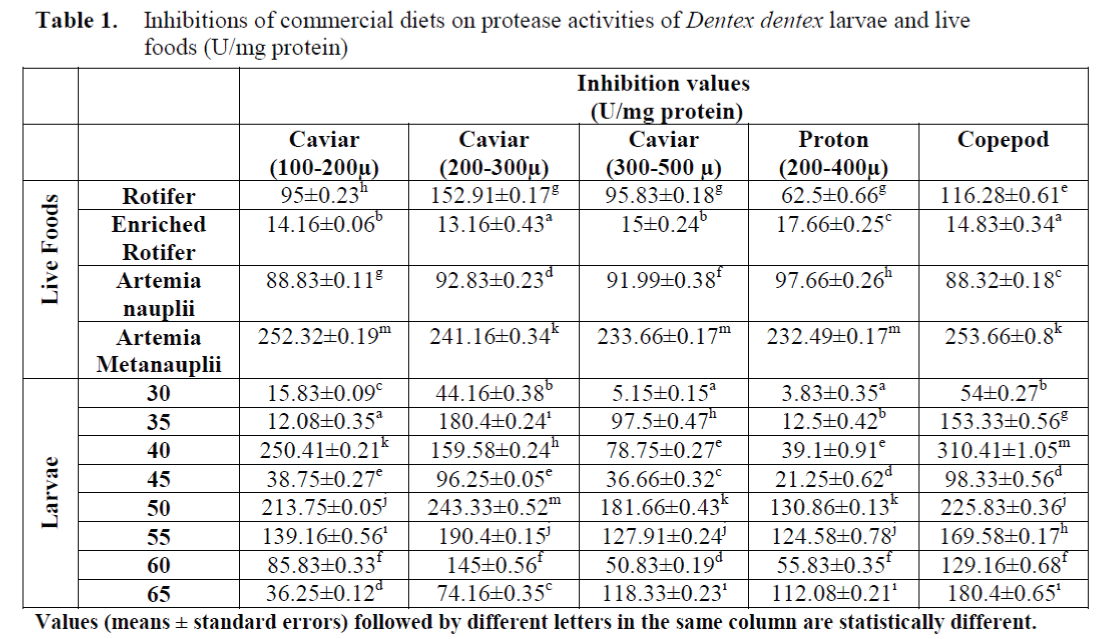 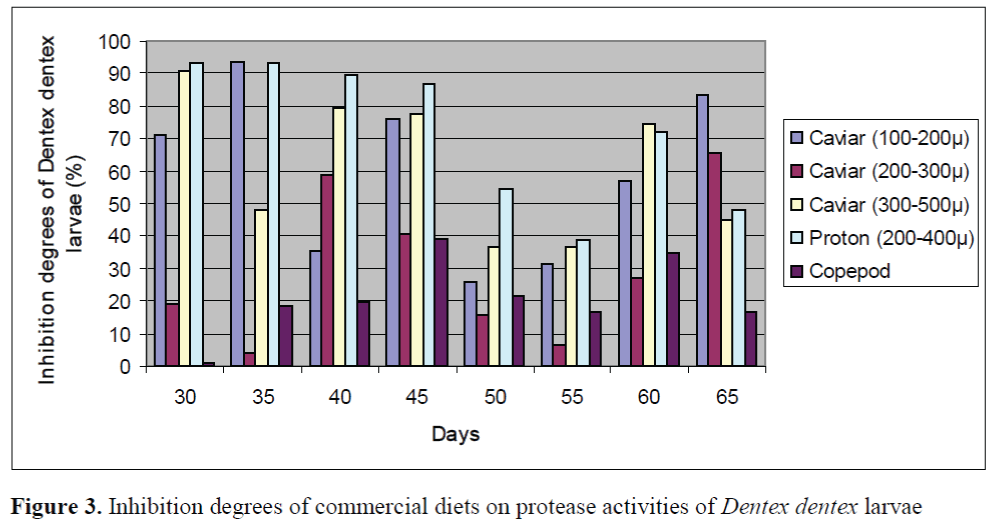 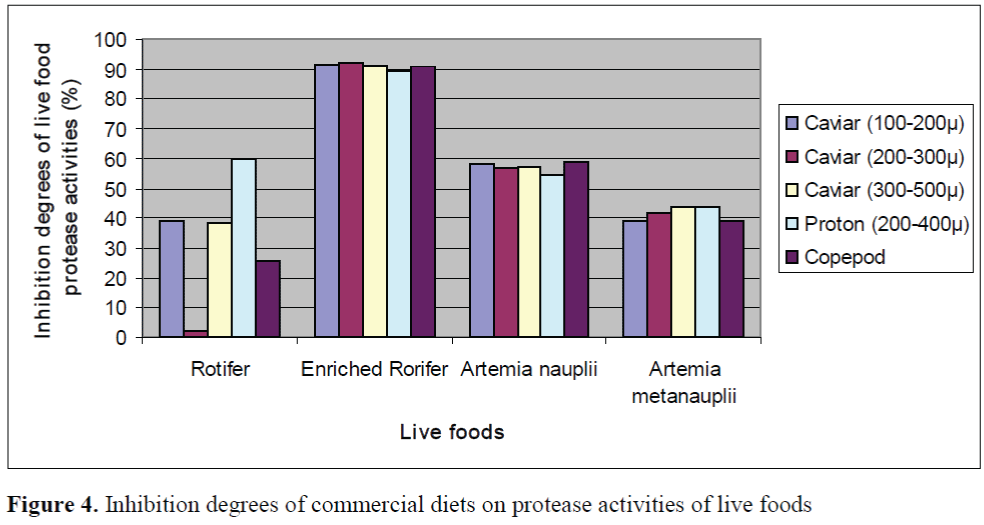 Our results revealed that commercial diets such as Proton (200-400μ), Caviar (100-200 μ) and Caviar (300-500 μ) caused a significant inhi-bition on protease activities of larvae and live foods. However, Caviar (200-300μ) and Copepod had the lower inhibition on protease activities of larvae. As reported by some researcher, the di-gestive performances of marine fish larvae fed solely on microdiets are known to be very poor (Cahu and Zambonino Infante, 1994). On the other hand, marine fishes appear to have high protease activities in the larval stages (Cahu and Zambonino Infante, 1994; Cahu and Zambonino Infante, 1995; Moyano et al., 1996). Some au-thors hypothesized based on the above findings that the limited utilization of microdiets may be related to partial inhibition of protease activities by some dietary factors. Alarcon et al. (1999) showed that ovalbumin significantly reduced (60%) the activity of proteases in 8-day-old sea bream larvae. Similar results were found when commercially produced microcapsules containing ovalbumin were tested using shrimp proteases (Alarcon et al., 1997).