In some comparative studies, API system was reported to be more accurate, simple and rapid than other methods used for bacterial identification. Previously it was indicated that those system could be replaced with conventional biochemical methods (Oberhofer, 1979; Poutrel and Ryniewiczt, 1984). The API-20NE is reported to be useful for identification of environmental bacteria (Truu et al., 1999), while the API 20E system provide a reliable means to identify members of the family Enterobacteriaceae (Edwards and Ewing, 1972; Edinger et al., 1985).

It was known that the micro-organisms associated with most fishery products indicate the microbial flora in their aquatic environment (Ashie et al., 1996; Gram and Huss, 1996). It has been estimated that world ocean contain more than 1029 microbes (Whitman et al., 1998). Concentrations of microorganism of the sea depend on substantially water depth (Karl and Dore, 2001). Blue crab lives in soft-bottomed estuaries, bays and deltas, which females of the blue crab migrate offshore to spawn (FFWCC, 2005). One of the commercial important species in Akyatan lagoon on the Mediterranean coast is blue crab (Anonymous, 2008).

Wild blue crabs (Callinectes sapidus) were caught by dip net in Akyatan Lagoon in the south of the Mediterranean Sea and transferred to laboratory. The mean carapace length and width of blue crab were 6.19±0.04 and 12.03± 0.17 cm, respectively. Blue crab samples were taken from three part of the crab which surface, body meat and claw meat. Surface of the blue crab was sampled using sterile swap and transferred onto agar plate. Body meat and claw meat of crab were aseptically weighed (10 g) and mixed with 90 mL of Ringer solution and then stomached for 3 min. Further decimal dilutions were made and then 0.1 mL of each dilution was pipetted onto the surface of agar plate in triplicate. Petri dishes used for each groups were consist of Plate Count Agar (PCA), Violet Red Bile Agar (VRBA), Listeria Sellective Agar (LSA), Salmonella-Shigella Agar (SSA). All groups were incubated for 2 days at 30ºC. Each of chosen individual bacterial colonies was spread out several times on the agar plate using sterile loop in order to produce pure colonies. Isolates were identified according to the manufacturer’s instructions of API 20E, API 20NE and API Listeria strip system (BioMereux, France). The inoculated strip was incubated for 16-24h and the colour reactions were noted either positive or negative. The result obtained were analysed using the APILAB PLUS software (Biomerieux, France). 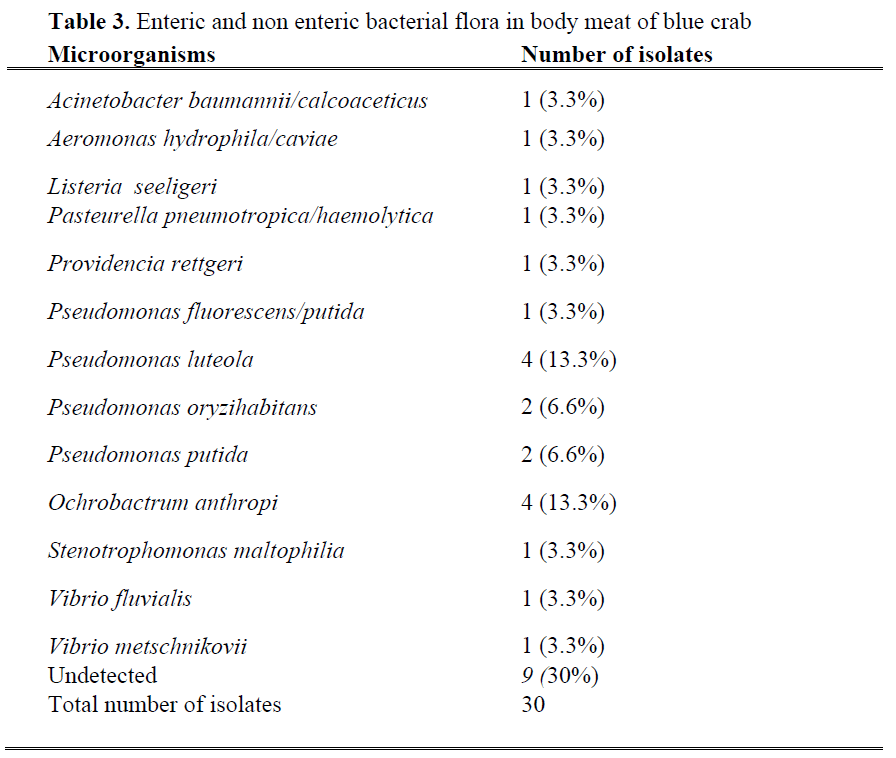 Total number of isolates from body meat of blue crab was higher than that of other parts of the blue crab. These include Acinetobacter, Aeromonas, Listeria, Pasteurella, Providencia, Pseudomonas, Ochrobactrum, Stenotrophomonas and Vibrio strains. Percentage of Pseudomonas luteola and Ochrobactrum anthropi was 13.3%, which is higher than other isolated strains. Ochrobactrum anthropi, formerly classified as Achromobacter is a ubiquitous pathogen organism, which is widely distributed in the environment and water sources (Kettaneh et al., 2003) and may be part of the normal flora of the large intestine of human (Galanakis et al., 2002; Wi et al., 2007).

Pathogenic bacteria have been found in shellfish, including Vibrio parahaemolyticus, Salmonella, Clostridium, Escherichia coli, Campylobacter, Aeromonas and Listeria monocytogenes (Ward, 1991; Gillespie et al., 2001; Huss et al., 2000). However, in the present study, different pathogen bacteria species were isolated. The occurrence of pathogenic microorganisms in seawater or in shellfish could exist anytime sewage from human or animal origin would be discharged to the coast (Metcalf, 1982). The presence of pathogens in the environment mainly depends on the density of the coastal urban and animal populations (Pommepuy et al., 2005). The Akyatan lagoon is rich in fish and bird species. There are extensive farming activities in lagoon enviroment and receives domestic and industrial wastes. These factors could be responsible for contamination of blue crab with these different pathogen species.

The hygienic handing of blue crab from the moment of capture to the point of consumption is crucial to ensure good quality and long shelf life. Bacterial contamination of blue crab flesh is a main cause of spoilage and is of particular importance if the blue crab is contaminated with pathogenic bacteria, which causes food poisoning or even death amongst consumers. Therefore, blue crab should be kept clean and chill temperature which can help to minimise or delay the growth of bacteria. Good hygiene practice and proper handling are necessary to prevent food poisoning associated with consumption of blue crab.

Oberhofer, T. R. 1979. Comparison of the API 20E and Oxi/Ferm systems in identification of nonfermentative and oxidasepositive fermentative bacteria. Journal of Clinical Microbiology, 9:220-226.